Staff Predictions: Pass The Bucky On The Left Hand Side

Share All sharing options for: Staff Predictions: Pass The Bucky On The Left Hand Side

Some last minute predictions from your trusty Black Shoe Diaries writers.  Don't forget the open thread tomorrow night.  If you're good, maybe Mike will create a separate post for the early games. 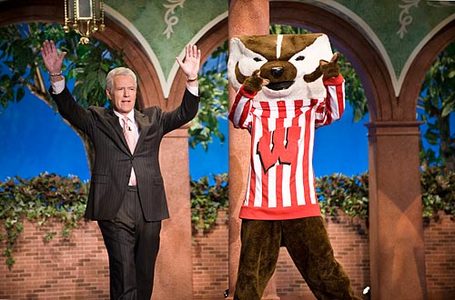 Another week another "first test" for Penn State. This week it's our first "tough" road game. Okay, fine. Maybe next week Michigan will be some other kind of "first test", but I'm hoping we make a statement in this game so people stop doubting us.

Wisconsin is a team I think we match up very well against. They have two or three good running backs, but they're the same old Wisconsin. They line up and try to run you over. You can put eight or nine guys in the box and they're still going to try to run you over. That may work great against Akron, but we should have the players to stop them. Stuff the middle and get Hill going sideways and he falls like a house of cards. I think he and Clay will get a ton of rushing yards, but they'll get them three yards at a time. If we can limit them to one or two yards on first down they'll have to go to Evridge on third down, and I think that's a good situation for us.

Offensively we should be able to exploit the Badger defense. Their front seven is good, but their secondary is suspect. So it all comes down to Joe Paterno. He needs to let Jay and Galen take a shot at the deep ball when it's there, and Wisconsin is going to offer it to us to take if we dare. But if Joe circles the wagons and turns this into a game of execution by ramming Royster into a defense that is stacking the box just to prove he can, this game is going to be frustrating to say the least.

Wisconsin has spent the past week looking back at the last two weeks instead of focusing on the Nittany Lions. There is even internal debate over who the starting quarterback and running back should be. Dreams of a national championship have been replaced with hopes for just making the Outback Bowl. Meanwhile, this Penn State team is hungry and focused. They have been looking forward to this game since the final seconds ticked off the clock in West Lafayette. Heck, I might even argue they've been look forward to this game since they defeated Illinois.

I would have never guessed this summer that Wisconsin would be unranked this early in the season, but with the help of a 4th quarter meltdown against Michigan and the prevent defense against Ohio State, Wisconsin is sitting at 0-2 in Big Ten play.  I've read some pretty hilarious previews this week, ones that include things like "there is no way Wisconsin drops two night games in a row" or "if Wisconsin can play physically, Penn State won't be able to handle it".  It's amazing the incredibly irrelevant comments people will make in order to try and apply some type of predictive substance.

In reality, I think this game plays out as a lot less exciting than expected.  Clark proved against Illinois that he can keep up when matched against a productive offense, and Bradley seems to have a very good understanding of how to play defense when you have the lead.  If Penn State gets off to a fast start, I don't see how Wisconsin, with a slow moving offense and shaky quarterback, will be able to keep up.  Hill will have plenty of yards tomorrow, but with even a ten-point lead it will be difficult for him to have a significant impact running four yards at a time.  Bradley will let him do that all day, and by the time they close the gap the game will be over.

Of course, being a road game, I have a pit in my stomach that no amount of logic can erase.  I'm talking about the 2007 Michigan strategy and, until I see it with my own eyes, I'm awfully nervous about our tendency to voluntarily play with one hand tied behind our backs.  Everything I read says that Paterno has learned his lesson, and with that I remain cautiously optimistic about tomorrow night.  Williams loves the big stage and Clark's swagger seems to be road-resistant.  Penn State is the better team tomorrow and so, at the risk of getting my hopes up, I expect that the team will pass their "first test" version 7.0.

Run Up The Score:

Allow me to present the last four results of Penn State at Wisconsin:

In 2006, 2004, and 1998, Wisconsin went a combined 32-5.  Penn State was 22-14.  Obviously, Wisconsin had significantly better teams in those matchups, averaging nearly 11 wins per season, while Penn State was the very definition of mediocre.

This year, it seems that Penn State is the team on course for 11 wins and Wisconsin (as in 2002) will be lucky to achieve fringe Top 25 status by the end of the season.  So while I expect Penn State to put up more than a mere field goal, I still expect a relatively low-scoring, grinding game that will drive us all insane.  This isn't a situation where Penn State will employ the traditional "hang around until the 4th quarter strategy".  It'll just feel that way.

Wisconsin will be able to run the ball.  I've seen too many missed tackles to believe otherwise.  The real question is how often they'll run it.  We love to complain -- all of us, really -- that Penn State gets too conservative on the road in places like Madison, Columbus, and Ann Arbor.  That's probably true.  Personally, I think the strategy has to be, in the simplest terms, score 24 points and dare Wisconsin to equal it.  The first quarter will be paramount.  Get the lead, make Wisconsin throw the ball more than they'd like, and good things will happen in spades for Penn State.  If the Badgers end up with 47+ rushing attempts at the end of the game, it's very likely that Penn State will have lost.

I can't brag about my ability to predict final scores this season, but I've generally been correct about Penn State's "flatness", for lack of a better term.  In this instance, I believe that the night atmosphere helps Penn State -- they're much more likely to be sharp at the outset for an 8:00 p.m. start as opposed to a noon kickoff.  It'll be a struggle, but if turnovers and other mistakes are relatively even, Penn State should prevail.  Barely.