Grading the Offense Against the Wisconsin Badgers

Share All sharing options for: Grading the Offense Against the Wisconsin Badgers 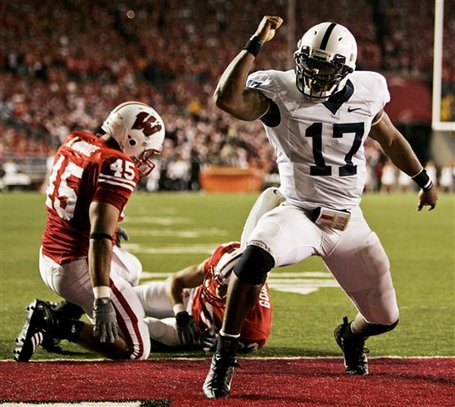 Fifty years from now they will no longer give out the Heisman Trophy. They will give out the Clark Trophy. And this is what it will look like.

Evan Royster had a difficult time getting free on Saturday. The Badgers front seven is the best that Penn State has faced all year. They are big. They are fast. And they are physical. But still there were several times where Royster was able to break into the second level, but every time there was a linebacker there to make a play. He did all of his damage in the first half recording 58 of his 60 rushing yards before the break. He was basically non-existant in the second half. Wisconsin sold out against the run thinking eventually we were going to stop running up the score and just try to kill the clock. So Penn State passed until they were ready to call off the dogs. And then they used Stephfon Green. Royster didn't get the 20, 25, 30 yard runs we're used to seeing, but he still had a good day averaging 4.3 yards per carry on just 14 touches. The best stat of the day was no fumbles.

I would also be remiss if I didn't mention Dan Lawlor who did a fantastic job in blocking. Especially on Royster's touchdown.

Fantastic. Outstanding. The Williams/Butler/Norwood trio pretty evenly combined for 10 catches for 155 yards and a touchdown. Somebody was getting open on seemingly every play and Clark was finding them. And on occassions when Clark had to get out of the pocket and buy time they were outstanding in adjusting their routes to either come back or clear out as Clark often found them long after the play broke down to move the chains and keep drives moving.

And of course their blocking was excellent as always. Though Royster had trouble getting out in the open you could often see a white jersey flattening a red jersey in the top of the screen away from the play. These guys are tremendous blockers.

The only knock was Williams had a horrible drop early on that would have set up a touchdown. But he made up for it with the punt return so we'll forgive that.

It's a shame the Heisman trophy voters are so hung up on preseason hype and gaudy statistics. If there is a quarterback with more poise, confidence, and moxie that brings more value to his team I don't know who it is. One drive in particular could have been Clark's defining "Heisman moment" if half the country hadn't already turned the game off to go to bed.

Penn State was holding a comfortable 31-7 lead midway through the third quarter. A holding penalty on Stefen Wisniewski on an Evan Royster screen play had Penn State backed up and facing a 3rd and 20 from their own 8 yard line. They could have just ran a draw play for seven yards and punted out of the situation and I don't think anybody would have blamed them. But Jay Paterno and Daryll Clark had other ideas.

Clark took the snap and dropped back to the goal line. Protection quickly broke down as pressure came up the middle. Clark stepped back into his own endzone and broke for the right sideline. Again, he could have scrambled for five yards and ran out of bounds and been fine. But he looked up field and found Jordan Norwood streaking for the Wisconsin sideline. Clark threw a lazer on the run with defenders zeroing in. Twenty-one yards. First down. Clark ran up right in front of the Wisconsin bench and nonchalantly flicked his wrist and pointed his fingers signalling "first down."

Three plays later Penn State faced another third and long situation at their own 31 yard line. Clark dropped back to pass and again the pressure came. This time Clark rolled left. Just before reaching the sideline he twisted his body and threw the ball down field just as a defender clobbered him with a shoulder to the chest. James McDonald caught the ball along the sideline 25 yards down field. Another first down.

On the next play Clark again had to evade the pressure by rolling to his left. Throwing across his body he found a wide open Deon Butler who caught the ball in stride at the 15 yard line and walked into the endzone. It was at this point in the open thread where I expressed my willingness to have Daryll Clark's child.

His runs inside the redzone were tough and gritty which is the stuff legends are made of at Penn State. Outside of the meaningless late interception and the fumbled snap, he had a perfect day. He was visibly upset on the sideline after throwing the interception and A.Q. Shipley had to get in his face and get him focused again. Several people commented they liked the perfectionist attitude. I agree being a perfectionist can be a good thing, but it makes me wonder. If he reacts to throwing an interception by pouting on the bench when he's up 41-7, how will he react when he's down 13-10? We can't have him lose focus like that in a close game. The team looks up to him so I would prefer he keep his composure and stay upbeat. A minor complaint, but something to watch out for.

Again, this was the best front seven they have faced all year. I thought they were pretty evenly matched in the running game. Sometimes Penn State won and Royster/Green had room to run. Other times they got stuffed for no gain or a loss. The pass protection was good for the most part. The times it did break down Clark was able to improvise and make it work.

Once again Cadogen was a monster pulling down the line. There are times I almost feel sorry for the unsuspecting linebacker as he shoots the gap only to be destroyed by Cadogen. In my opinion he's better than Levi Brown ever was.

There were a few times when I felt Shipley wasn't holding his blocks long enough. He would break into the second level and seemed to be at a loss over who to block next. This usually left Clark or Royster to get tackled while A.Q. stood there and watched. And Wiz had that ill timed holding penalty mentioned above that negated a first down. But that was the only penalty of the game which is very impressive on the road. Considering the toughness of the opponent I'm pleased with 107 yards rushing and no sacks. But it wasn't a dominating performance.

Going into the game we were all worried that Joe was going to pucker up and try to grind out a 9-6 win. Nothing could have been further from the truth. Penn State ran 35 rushing attempts and 30 passing attempts. Considering the game was well in hand by the middle of the third quarter that is very well balanced.

Nobody expected that kind of offensive explosion. Wisconsin came in determined to stop the Penn State running attack. They sat in their 4-3 defense and cheated a safety into the box often. Penn State simply made them pay with play action deep passing. And they kept their foot on the gas well into the fourth quarter. The announcers were even hinting that Penn State was a little late in calling off the dogs. Perhaps Joe wanted to give a little payback for the broken leg and the shenanigans Bielema pulled the last time we visited Madison.

I continued to be impressed with the versatility of this offense. Last week we grinded out a low scoring win at Purdue by running between the tackles against an opponent with a weak defense. This week we finessed our way down the field against a slower defense. But when we got inside the redzone we lined up in the I-Formation and hit them in the mouth.

At halftime Jay Paterno must have felt like he was indeed calling plays on the Playstation as he told Clark "we can run anything out there." A few weeks ago I was unprepared to call this offense as good or better than the 1994 offense. Now, having watched that game this weekend, I'm getting closer to making that call. This offense can seemingly do whatever they want. They are diverse. They are fast. They are strong. They are explosive. I'm still not sure if they are as good as that 1994 squad, but I do know this offense has something that offense didn't have. A scary good defense to back them up.