Penn State In The Computers: Where Reason Isn't In The Dictionary

Share All sharing options for: Penn State In The Computers: Where Reason Isn't In The Dictionary 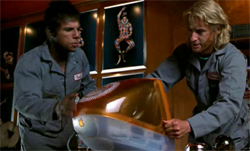 You've probably read by now that Penn State is a consensus #3 in both the Coaches' and AP Poll.

The Harris Poll, which usually mirrors the AP, also has PSU ranked #3, although the gap appears to be a bit narrower between #2 and #3 as compared to it's non-BCS equivalent, the AP.  They also received four of the 113 first place votes.

Five the the six computer polls used in the BCS are currently out, allowing us to take kind of sneak peak at what the formula will spit out next week.

In depth after the jump...

Sagarin also puts out a different formula, one that is deemed a bit more accurate, that has Penn State ranked #3.  This set of numbers includes margin of victory and can't actually "count" per BCS rules.  While the ranking appears a bit more in line with the human voters, there is something funky going on with Sothern Cal, who comes in at #2 in large part because Ohio State is at #10 and 3-3 Oregon State managed to score high enough for the #17 spot.

The Colley Matrix looks a lot more like the AP, with the top three going Texas, Alabama, Penn State.  They mark Oregon State as PSU's best win to date and have the SOS at #105 nationally.  Michigan State comes in at #6 and his system also put Ohio State one spot ahead of USC (#8 and #9, respectively).

Anderson & Hester loves them some mid-majors.  They put PSU in the #5 spot behind the usual suspects but them some that aren't: Boise State (#3) and Utah (#4).

(note: the following two rankings have been updated; there were mistakes in the compilation site I was pulling from)

Billingsley pulls Penn State into the #6 spot .  They follow three one loss teams: USC (#3), Oklahoma (#4), and Ohio State (#5).  This is where not being allowed to include points for and against really handicaps the computers.  Penn State was dominant against Oregon State and Wisconsin, but those scores aren't reflected in this list when comparing PSU to USC and OSU.  Regardless, I'm not sure how Ohio State can be ahead of Penn State when they have, for the most part, very comparable schedules.

Massey moves Penn State down three spots to #10 and is, similar to Billingsley, filled with some strange quarks.  This is yet another example of the computers having a tough time understanding the Oregon State upset as USC holds the #4 spot here.  This system gets even stranger, however, as both Virginia Tech and North Carolina are both ranked higher than the Lions.  I'm going to just assume this is a sample size issue as there isn't much in the way of a logical explanation for those two schools being so high.

Wolfe's ranking don't appear available until the official release next week, but a somewhat related ranking system called the Big XII Computer Rankings "FACT" has PSU at #4 behind Texas, Oklahoma (?!), and Oklahoma State.  Missouri is also somehow #5 and Texas Tech comes in at #7; that's the Big XII in four of the top five spots, five of the top seven.

What to make of this so far.  With the data we have, Penn State appears to have the 5th best computer average.  This is two spot lower than their human poll counterparts and probably not enough to drop them in the actual formula.  It's becoming painfully clear that the SOS is going to be a major issue if things get sticky down the road.  It's way to early to start worrying about it, but with Illinois' loss to Minnesota, Michigan's loss to Toledo and previous losses by Ohio State and Michigan State, the computers will probably continue to hold a lower average than the human polls even if the team continues to win.