Grading the Defense Against Wisconsin

Share All sharing options for: Grading the Defense Against Wisconsin 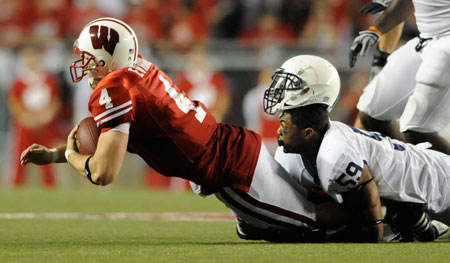 After not getting much pressure last week against Purdue, the D-line showed up gangbusters, completely running over the much heralded offensive line and stopping Hill short of three yards over and over again.  The very first series set the tone as the Badger power run game was stopped on 2nd and 3rd down and forced to punt after a quick three-n-out.  The linebackers consistently showed up in the backfield in large part because this unit was doing their part to occupy (roughly) 1700 pound offensive line.

Special space needs to be devoted to Aaron Maybin's performance.  He showed up in the backfield early in the game and it was clear from the start Bielema and his staff had no answer for him.  Paterno said after the game:

“He’s doing really well. I just wish I could put weight on him. He doesn’t eat. He’s doing very well. He’s so quick and he loves to play. You can see that. I have to sit him down and tell him never mind all of the jumping around. He’s going to get us a 15-yarder,” Paterno said.

How about this: if it's not broken don't fix it.  He recorded 3.5 tackles for a loss and forced two fumbles, including what turned out to be the game sealing recovery by that lead to the third touchdown of the game.  He does seem a little underweight but his speed is what made him so effective on Saturday night.

The linebackers were able to do pretty much as they please; the d-line jammed up their assignments and allowed the next line of defense to either move in against the run or cover what short passes weren't knocked down at the line of scrimmage; Hull followed up on last weeks solid performance with another respectable game that included a right place/right time fumble recovery.  Navorro Bowman was filling holes all day and led the team (along with Scirrotto) with eight tackles.  Not to take anything away from the other non-Lee linebackers, but Bowman appears to be the air apparent.

I don't know if this group strikes as much fear as those in past years, but to be honest every season there are big shoes to fill at linebacker and I think things are progressing just fine.

Wisconsin isn't a major passing threat but it was important that the secondary be able to defend against any cheap passes or home run plays.  We talked before the game about how difficult it would be for the Badgers to come from behind and that ended up being the case.  Sargeant had a great game, sticking to his receiver and intercepting two passes.

The two major issues were the missed tackles on Evridge TD scramble and, of course, the long slant that set up 's only score.  After looking back on that play I'm not quite as upset; it was a good play call to counter an aggressive defense and Penn State had some tough luck with what effectively was a pick on Davis, who stumbled and wasn't able to catch up to Beckum.

This unit was supposed to be a major liability yet I'm starting to think they are better than last year despite the significant personnel losses.  Very few receivers are getting wide open down field and they are doing a good job of keeping the damage of the short passes to a minimum.

It couldn't have been a totally dominating performance without this group.  Nathan Stupar set the tone on the opening kickoff with a big tackle inside the 20.  He also had an important block on the kicker that allowed Williams to go untouched into the end zone on his big punt return.  Speaking of Williams, I'm more than happy to take the good with the bad, but I'm both excited and terrified to see him back on kicks.  He seems to want to start running before he gets the ball secured and the first punt was almost devastating.  He is too good a weapon to simply not use, and for today we can simple say "no harm, no foul" on the bobbles; besides I have to think the coaches will address it as he is simply too good to not have back there every time.

Kevin Kelly, who has a terrible time with 40+ kicks last year (2 of 8), seems to have correct that; he is 1-1 in the 40s and 2-3 in the 50s.  The offense got off to a slow start and Kelly's 50 yarder was important in establishing some momentum.  He added a shorter, less meaningful kick in the second half and went 6 for 6 on extra points.  It's happening quietly, but Kevin Kelly is having a great season and might be one of the better kickers in the nation at this point.

Boone had another strong day, averaging almost 45 yards per kick on four attempts.  He boomed on into the end zone early but was otherwise very effective at the pin-back, putting inside their own 20 three times.

Bradley, with the added pressure of being the "de facto" head coach, might have executed the perfect game plan this weekend.  That really can't be understated.  I made a comment before the game that Bradley seemed content to let opposing offenses take 4 or 5 yards at a time so long as they don't break anything for a big gain.  As such, I expected a very conservative rush with lots of players stacked in the box.  Instead, the defense played ultra aggressive and neutralized Hill from the get-go.  When realized that they needed to start opening it up, the defense was in the face of the quarterback almost immediately with the pass rush.  They were utterly dominant in no small part to countering everything was doing before the ball was even snapped.  I'm not endorsing any candidate, I've always maintained that I want an open process, but I think the administration needs to make sure they understand what they are doing if the option they chose involves giving up Bradley.