Back by popular demand...some video and screenshots of the Wisconsin game.  The episode in which we explore illegal picks, easy touchdowns and phantom reversals.

Act I: How the bend-but-don't-break broke.

In an otherwise great performance, the defense gave up a very uncharacteristic big play on what appeared to be a sell-out rush combined with bad coverage.  Upon further inspection, however, there was something a little fishy about the way a receiver running a five yard slant pattern was able to get six yards of separation from his cornerback.

The first thing to look at here are the two Wisconsin receivers, running toward each other about three yards in front of the LoS.  Notice that, to the right, Tony Davis is all over Travis Beckum. 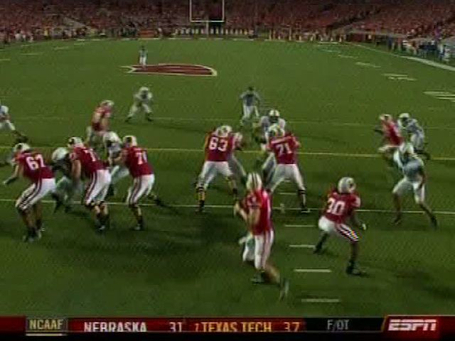 Ah, the old "turn-around-tail-out" route, in which non-option from the left plants himself firmly in front of his teammate's cover man. 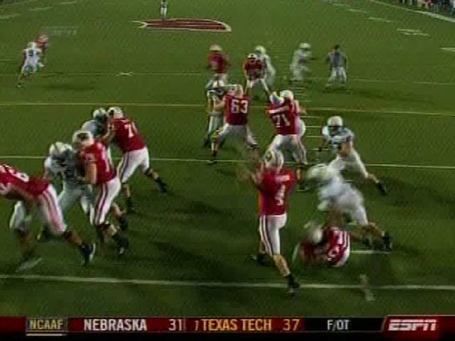 Davis, at this point, is pretty much knocked off his feet as the ball is being released.  Not really relevant to the story, but the defensive line is all over Evridge just a nano-second after he gets rid of the ball. 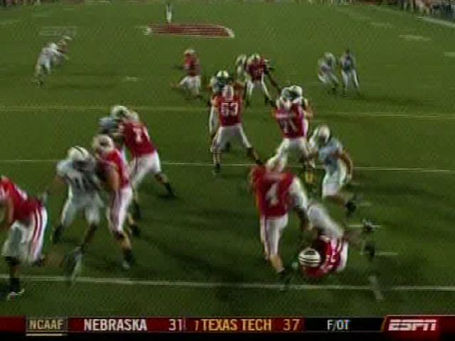 Alas, the Wisconsin receiver is in open space with little in the way of a safety valve in his way.  This was the risk Bradley took when he decided to send seven after the quarterback, and it was the appropriate call for Wisconsin.  The thing is, though, without that move over the middle this is probably a six to seven yard gain. 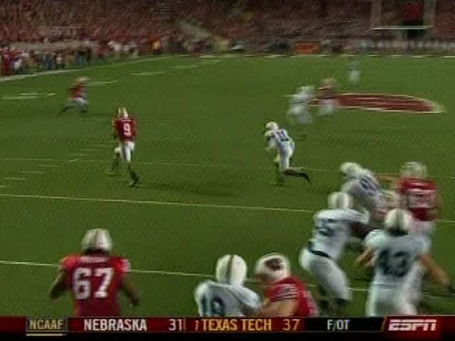 On 3rd and 3 it works, but considering the way the Badgers had been moving the ball up to that point, a score was highly unlikely even with a seven yard first down.  Now, these types of things happen all the time, and it wasn't as blatant as I've seen before, but it helps explain the one anomaly in Saturday night's almost perfect performance.

Here it is in full speed:

Act II: In which Williams takes a leisurely stroll though the middle of the field, and why he decided he might as well turn it into six.

Act III: In which instant replay does the opposite of what it was designed to do.

Mark Rubin made a great jump on the ball and appeared to bring it in for the interception.  The officials on the field thought so, anyway.

Instead, the instant replay official apparently spotted him some "indisputable evidence" and overturned the call.  From the first angle they show it does look a bit like the ball bounced off of something, but it's clear from the second angle that his arm was under the ball the whole time.

They say over and over again that a call cannot be overturned unless there is, in so many words, no question that the call on the field was wrong.  Not only is there not even close to enough evidence from the video to conclude that, but if anything the angles in the replay confirm that it was in fact an interception.

I'm not really worried about this particular call, it would have been meaningless and it was almost worth it to see Rubin kind of laugh it off and start making sure everyone knew he did actually catch it.  I guess I'm just a little confused as to why this keeps happening.  If a replay official can't be sure of the call, he is supposed to let the one on the field stand; it doesn't seem like that is happening.  It's almost like the closer the call the more random the outcome of the review process.