Then, Again: Not The Same Without Lloyd

Share All sharing options for: Then, Again: Not The Same Without Lloyd

Your weekly look at Penn State opponents, past and present. In December, who will you blame for destroying Penn State's strength of schedule?  My money's on The Zooker.

Coastal Carolina (3-4, #179 Sagarin rating) -- Lost to VMI, 47-20, the poor bastards. The Keydets put up 546 total yards on Coach Bennett's defense. We all mourn with him and his oratory awesomeness. The road gets a little easier next week against the 1-5 North Carolina Central Eagles.

Oregon State (3-3, #17) -- Predictably throttled Washington State, 66-13. The Cougars averaged a paltry 2.2 yards per play. OSU takes on Washington next week, and while the game may not be quite as ugly, it'll be close.

Syracuse (1-5, #119) -- Speaking of ugly, how does a 17-6 game between West Virginia (minus Pat White) and Syracuse sound? Your money quote from the Associated Press recap: "Syracuse had plenty of opportunities to take the lead in the second half yet was held without points three times after driving inside the West Virginia 20." The Orange are at South Florida this week. Good luck with that one.

Temple (2-5, #106) -- Lost at Central Michigan, 24-14. Surprisingly respectable, in a way. Their next game is a weird one -- a Tuesday night affair against Ohio. I thought Tuesday nights were reserved for Pitt. No?

Illinois (3-3, #50) -- Is it okay to state that we're lucky Minnesota isn't on the schedule this season? And honestly, who would want to see those awful maroon and gold uniforms during an undefeated PSU run? The Illini lost to Goldy, 27-20. Illinois had the advantage in yardage (by a wide margin, 550-312), but Minnesota sacked The Juice five times and forced three turnovers. The Juice threw for FOUR HUNDRED SIXTY-TWO YARDS. And lost. To Minnesota. They host Indiana on Saturday. 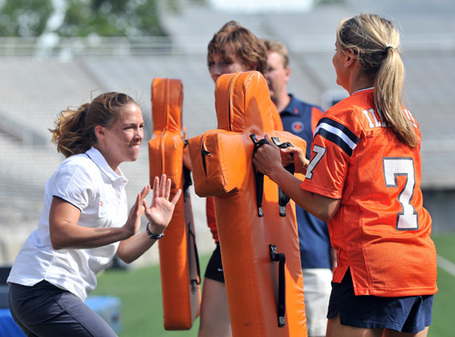 And sometimes, the captions write themselves.

(Photo from the Daily Illini)

Purdue (2-4, #64) -- Lost to Ohio State, 16-3. I believe this is Basketball On Grass, before the invention of the shot clock. They're at Northwestern at noon Saturday.

Wisconsin (3-3, #44) -- Remember how you used to feel after Michigan would come into Beaver Stadium for a highly-anticipated game and just flatten Penn State, completely crushing the crowd and erasing any semi-reasonable optimism about your favorite team? That's roughly the level of devastation in Madison this week. For a glorious three hours on Saturday night, Wisconsin truly put the "turd" in Saturday. Now it's a game against desperate Iowa, at Kinnick Stadium, in which Wisconsin will have to somehow pick up their shattered season and locate some form of pride. Tough job for Bret Bielema.

Michigan (2-4, #82) -- And then there's Michigan. The proper and popular smarty term Schadenfreude applies, just as it did when Michigan lost to Appalachian State last season. The two caveats, of course, being that (1) we were once embarassed by Toledo at home, albeit a much better Toledo team, and (2) as of this writing, Michigan still owns Penn State.  Regardless, it's hard not to salivate at the increasingly likely excorcism Saturday  night.  Yes, yes, none of us will be truly safe until no time remains and Penn State has more points than Michigan.  It's true.  But just in case it turns into a potential laugher, would you blame Joe Paterno for trying to hang half-a-hundred on Michigan?  Surprisingly, I say yes.  Get a decisive win, don't leave the starters in to take any cheap shots, and get ready for Ohio State.  It's not the same without Lloyd Carr across the field, anyway. 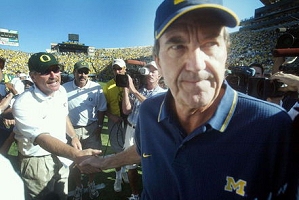 Ohio State (6-1, #10) -- Are things getting a little weird in Columbus?  The Terrelle Pryor experience has been successful in terms of wins and losses, but let's face it, Ohio State is playing way below anybody's expectations and they're getting by on sheer talent.  Given the weak Big Ten this season, that's still good for six or seven conference wins.  You'll recall that Boeckmann carved up Penn State last season in Beaver Stadium.  It was honestly one of the best performances I've seen by any quarterback in a regular season game.  The Buckeye offensive line dominated, and Boeckmann did whatever he pleased.  I'll be thrilled if he remains on the bench next weekend.  This weekend?  They travel to East Lansing for what is Your Big Ten Game Of The Century Of The Week.

Iowa (4-3, #38) -- An emphatic 45-9 win over Indiana puts the Hawkeyes back above .500 and back in the race for bowl eligibility and positioning.  Their remaining schedule looks a lot better after Saturday's results, and it's not wholly unrealistic to think that Iowa could beat Wisconsin, Illinois, Purdue, and Minnesota to finish with eight wins and 5-3 in the conference.  Still, 7-5 (4-4) is a more likely result, and I don't think the folks in Iowa City would be too disappointed with it.

Indiana (2-4, #90) -- As for Indiana, it's looking really, really bleak.  There's no defense to speak of, and they're likely underdogs in all of their remaining games.  They were a great story last year for all sorts of reasons.  This year, yeah, not so much.

Michigan State (6-1, #16) -- They took down Northwestern 37-20 after being spotted 17 early points by the Wildcats.  They enter Saturday's showdown with Ohio State as three-point home underdogs...which is intriguing.