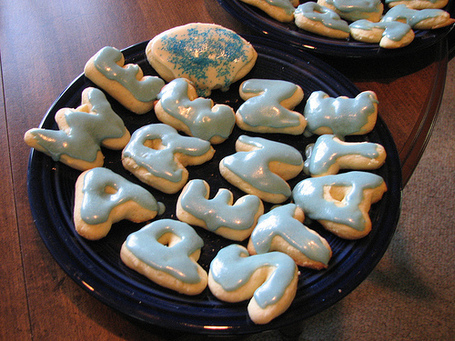 Kicking Television: ESPN matinee, baby.  Your announcers are Professional Announcer Sean McDonough, the grating Chris Spielman, and Rob Stone.  If you're aimlessly driving around the mid-Atlantic, here are your radio affiliates.

Legendary Statistical Achievements:  MGoBlog ran a fun piece about Chris Stassen earlier this week.  Stassen's a Godfather-figure when it comes to college football and The Internets.  Remember newsgroups?  If you're a nerd and over the age of 35, you just said "yeah!".  If not, exactly. Stassen's database is an essential for practically any college football research, and those of us who wasted way too much time in the mid-1990's arguing about football on a slow dial-up connection are just happy to know he doesn't have some sort of terminal carpal tunnel injury by now.  Even if he's a Buckeye.

By Sagarin-predictor pointspreads, Michigan is an underdog of more than a touchdown in every remaining game:

Using these numbers, the composite odds for Michigan's final six games of the regular season are:

Weather:  Let's just say you'll be tired of the phrase "football weather" by gametime.  Low 50's, dipping into the high 40's by the end of the night, and clear.

Ouch, Babe:  The usual suspects are hurt, along with Brent Carter (ACL tear).  Brett Brackett is listed as "possible" with a concussion.

You Know What The Recruiting Process Needs?  More Stalking.  Impossible to condone, impossible to stop.  Those were my two thoughts after reading this Washington Post article with a heavy Penn State lede about an overzealous Penn State student:

And when it comes to football recruiting, Meyer believes Penn State is everything any top high school prospect could want, too. That's why Meyer reaches out to some of those recruits via online social networks such as Facebook and MySpace. Maybe, he reasons, if a recruit sees that students from a certain school who aren't associated with the athletic department take the time to initiate a relationship, it might influence that recruit's decision on where to attend.

"When you follow recruiting, you wish you were the coaches going into the houses and telling kids about the tradition," Meyer said. If coaches can't recruit through social networks, he added, "students can do it."

It's not all evil for Penn State.  Page three of the article references the PSU administration stepping in and shutting down a Facebook group to avoid any taint from the Terrelle Pryor frenzy last winter.  Good read.

What An Iowa Fan Would Be Without All The Dick Jokes:  Mark Hasty's Pickin' On The Big Ten senses a theme.

They're 6 and 1. They've lost to the only good team they've played. Their signature win thus far is over a team that, in retrospect, may not really be that good. They're solid on one side of the ball but they have issues on the other. Quick, which 6-1 Big Ten team am I talking about?

Answer? All of them.

And if you need help picking a college major, he can help with that as well.

Lest We Forget: I sincerely hate it when fans preach to other fans, "don't look ahead, we have to take it one game at a time."  No, we don't.  Not our problem.  We can look ahead to 2010 if we want.  Still, this painful reminder of the importance of "one game at a time."

In Scores From Other Games: At the risk of overloading you with embedded video, here's the CBS preview.

Now do I think Michigan's going to repeat it's 2005 performance? Probably not. There are too many things that have gone wrong this year. And frankly, the coaching hasn't been that good. But Michigan's shown the ability to string together quarters of competency before. And if this just happens to be the game they do it for four of them, well, then you never know.

Bad or not, never take a talented team lightly. Michigan may be bad right now, but I'd have to believe the Kool-Aid is spiked with some kind of hallucinogen if anyone's going to claim this team doesn't have talent.

Of course, given the past nine meetings between these teams, why shouldn't he believe?