Share All sharing options for: A Long Time Coming

Not after the way they embarrassed us in 1997. We were 7-0 and ranked #2 in the country. We had Curtis Enis and Joe Jurevicius and we were playing in our house. Nobody comes into Beaver Stadium and beats us in OUR house. But embarrass us they did to the tune of 34-8. That was supposed to be OUR season after the disappointment of 1994, and Michigan stole it from us. Then to add salt to the wound they went on to win the National Championship. The one that was supposed to be ours.

Not after the way we lost in 2002. Tony Johnson's feet were in bounds. Both of them. We should have had an easy field goal to win the game. But it was stolen from us and we lost in overtime. I'll never forget watching the Michigan players run to their student section and jump in the stands. The hate and rage filled my heart that day. Had Jeff Gillooly ran on the field and hit John Navarre and Chris Perry with a crowbar to the knees I would have been ok with that.

Not after the pain of 2005. The day after the 2005 Ohio State game I went to visit my grandmother in the hospital. She had been having a lot of health issues and was literally on her death bed. The doctors had only given her a few weeks to live, and that was ten months ago. She was on borrowed time and we all knew it. She was resting in Williamsport while I was living three hours away in Reading. It was a Sunday morning. Sunny and bright but a distinct chill in the air from all the rain the day before. I only had a few hours before I had to drive home to be at work the next day. Every goodbye over the previous ten months was treated like our last, so I knew this was probably the last time I would see her alive.

I remember walking in the hospital room with my mother. Gram was asleep. Her skin was pale and her hair looked like everyone's does when they're in the hospital. It was clean but all out of sorts from missing her hair appointments for the past month. My mother and I walked up to her bed and my mom touched her shoulder to wake her up.

When her eyes opened she smiled. She was extremely weak and heavily medicated. She couldn't even sit up in bed or lift her arms to give a hug. But when she saw me there she used what little energy she had to ask me a question. Her lips moved, and though no sound came out I could understand what she asked.

"Did we win last night?"

The joyous events from the night before seemed like they happened in another lifetime. Up until walking into that hospital room I had a smile on my face that wouldn't go away. Her question brought that smile back. It was a welcome diversion from the gravity of the situation. I opened my mouth and also found difficulty in making sound come out. Maybe I was choked up from seeing my loved one suffering through such unspeakable discomfort, but more likely my voice was gone from yelling at the top of my lungs for four hours straight the night before.

A smile came to her face. For that brief moment, when she was reduced to the lowest form of human existence unable to feed yourself or go to the bathroom, Penn State football brought her joy and comfort. She tried to speak again. It was soft and raspy, but this time she managed to make a sound to match her lips.

"They're looking pretty good this year."

"Yeah Gram. I think they're going all the way." 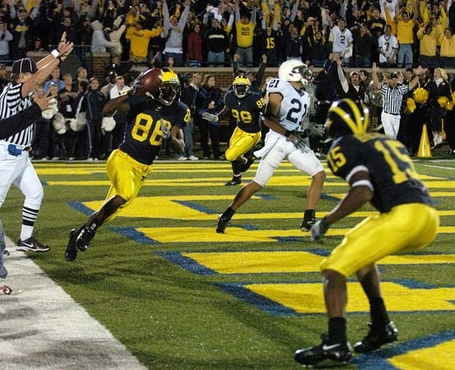 But of course they didn't. Penn State lost to Michigan a week later. I don't have to tell you how painful that game was to swallow. Fortunately, Gram died a few days after the Ohio State game thinking we were going all the way. God bless her.

So here we are facing a nine game losing streak that has spanned 12 years. We haven't beat the Wolverines since 1996 when I was a junior at Penn State. I would have savored that win a whole lot more had I known we would be sitting here in 2008 with a nine game losing streak. It seems like a lifetime ago. Since then I have gotten married. I just celebrated my 10 year anniversary. I've relocated three times and bought three houses. I have two kids. The oldest just turned four and is almost up to the point he can understand that Penn State wears blue, but not all teams that wear blue are Penn State. A third of my life has passed since that day. It's been too long.

So tomorrow we face off. We are the #3 team in the country destroying everything it our path, and they are 2-4 and struggling to find their way. The State College police are preparing for post game riots. Twelve years of anger and frustration should be lifted off our shoulders tomorrow. I should feel like a man imprisoned for 12 years feeling the warm sunshine fall down upon his face for the first time as he walks through the gate. But I don't.

It's not supposed to feel like this. Empty. Hollow. Unsatisfying. I always pictured breaking the streak to be a glorious battle. I pictured Michigan with a top five ranking while we were a heavy underdog with something to prove. I thought it would be a game of importance. A game that meant something. I pictured us beating Lloyd Carr and a team full of All Americans. Not some guys named Rich Rodriguez, Steven Threet, and Sam McGuffie. Beating Michigan tomorrow will feel no different than beating Purdue. It's a necessary step on the path to the goal we wish to reach, but it won't make me feel any better about this team or this season. When the game is over I will just put the kids to bed. Then I will fix myself something to eat and sit down to watch the late games. And then I will start to mentally prepare myself for Ohio State.