The turning point of the game followed Michigan's second touchdown, as Josh Hull and Tyrell Sales were replaced by Bani Gbadyu and Mike Mauti.  The results were impossible to ignore: 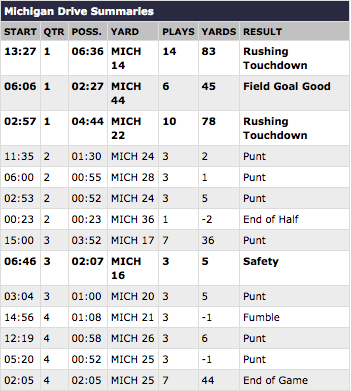 Yes, the appearance of the eternally comical Nick Sheridan had a bit to do with the second half drives.  Still, note the number of plays Michigan ran after the second touchdown.  When Penn State's defense was on its heels in the second quarter, Michigan had a 29-10 advantage in plays run.  The final tally?  Penn State 70, Michigan 68.

Hull and Sales each bounced back from their exiles.  Once Gbadyu was obliterated on big Michigan ground gain early in the third quarter, Hull was back in the game on the next play and went on to an amazing third quarter.  Sales absolutely busted his ass on special teams in the second half. They could've sulked, and didn't.

Gbadyu is still in a bit of a "headless chicken" phase.  He's always fast, and always in kind of the wrong direction.  Nate Stupar and Chris Colasanti got some work on Michigan's last drive.  Neither did anything noteworthy.

What does it mean for Ohio State next week?  The coaching staff seemed to settle on the combination of Mauti, Hull, and Bowman in the second half, and I'm guessing that's what you'll see in Columbus.  Everybody has to hope that Good Hull shows up as opposed to his evil twin.  Gbadyu could give someone a breather, but he's simply not a middle linebacker.

What were your hidden gems from this afternoon's 46-17 victory?