Purdue Preview: All The Oatmeal You Can Throw

Share All sharing options for: Purdue Preview: All The Oatmeal You Can Throw

Who Shot Who In The What Now? Penn State (5-0) at Purdue (2-2). Kickoff scheduled for noon at Ross-Ade Stadium in West Lafayette, Indiana.

A Fool And His Money: The various sportsbooks seem to have settled on making Penn State a 13.5 point favorite. The over/under sits at 58. Weather: Mostly sunny, with a high near 66. Light east wind.

Lest We Forget:  Purdue has always been an easy mark for Penn State -- the Lions are 9-2 against the Boilermakers, with the two losses coming in 2003 and 2004.  If you can stomach highlights containing Notre Dame competence, enjoy these clips from last week's game against Purdue:

In Scores From Other Games:  You know it, you love it.  Mark Hasty's "Pickin' On The Big Ten".  "It's Always Take Your Son To Work Day" is nice.  I would've gone with "World's Largest Drumming". 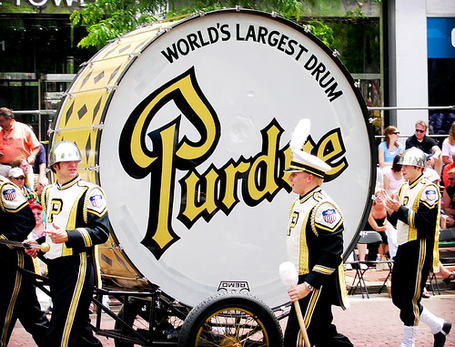 Smoke Signals From Enemy Territory: Purdue blogs Off The Tracks and Boiled Sports are here to help, although neither seem to have any PSU-Purdue content yet. Get to work, slackers.

I'm fairly sure that all three BSD writers are occupied with Real Life Responsibilities for the next 24 hours, but we'll be back with last-minute predictions and more tomorrow.