Grading the Defense Against Michigan

Share All sharing options for: Grading the Defense Against Michigan 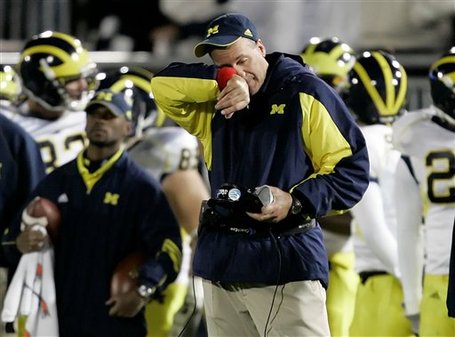 C'mon, people. Give me something to work with here.

It was a little sketchy in the beginning, but the defense finally clamped down and stopped the bleeding. I watched the tape again last night so I'll try to describe what happened and the adjustments that were made during the game. Let's start right off with the defensive coaching.

Penn State started the game in nickel defense with Hull and Bowman as the linebackers. When you look at most of the plays on the first drive, Michigan spread them out with four wide receivers and Brandon Minor in the backfield forcing Penn State to pull Hull back into coverage leaving just five guys to defend in the box. This gave Michigan two options in the backfield (Threet and Minor) with five guys to block our five guys. This was clearly a good matchup for Michigan, and due to the fact they were going no-huddle we couldn't get an opportunity to change personnel. Michigan almost exclusively ran left away from Evans and Bowman choosing to attack Gaines and Hull. Obviously this paid off with a touchdown.

On the second drive Penn State moved Hull back into the box, but Michigan still moved the ball well. So midway through the drive they abandoned the nickel and went to the base 4-3 with Ty Sales coming in the game. Michigan continued to attack the left with success, but Penn State managed to hold them to a field goal.

On the third drive Penn State started in the 4-3 again with Hull, Bowman and Sales at linebacker. On this drive Michigan went to the passing game with Threet connecting on two long passes to get into Penn State territory. But then they finished it off with a touchdown by just continuing to smash through the left side of the line. Toward the end of this drive was when Hull and Sales were pulled for Gbadyu and Mauti. They also turned Bowman loose to just start attacking the line of scrimmage since the Wolverines were obviously not running his direction. This was when Bowman and Odrick hit Minor three yards deep in the backfield seemingly stopping him only to have him roll off and fall forward for the first down.

On the fourth drive they went with the 4-3 with Gbadyu and Mauti instead of Hull and Sales. We'll get into the play of these guys later on, but this was when the Michigan defense was effectively shut down. Michigan continued running left into this defense with little effect. In the second half they brought McGuffie in the game to provide a lead blocker as they ran left. Penn State countered by cheating the linebackers in that direction, and they even switched the defensive ends to have Bowman and Evans on opposite sides.

Overall the defensive coaches did a good job of adjusting. But early in the game I think they obviously underestimated Michigan's offensive line. I suspect they were planning on seeing the darting McGuffie to start the game. Seeing the more physical Minor in the backfield may have had them playing back on their heels taking a "wait-and-see" approach. Michigan's no-huddle may have prevented them from making personnel decisions quicker than they would have liked. But ultimately they figured it out and fixed it. They're just lucky because last year spotting the opponent 17 points in the first half would have been disasterous. This is an ultra one dimensional offense that should have never had that much success.

In the early going they were just getting blown off the ball. The Michigan offensive line is pathetic and they were beating us up. They eventually came around and realized Michigan wasn't as easy as they thought it was going to be. In the second half Michigan fell behind and had to start throwing the ball. That allowed the coaches to start doing some stunting and the Michigan offensive line was completely confused. Evans, Odrick, and Maybin all got a sack with Odrick recording the safety and Maybin forcing a fumble that Abe Koroma was quick to fall on. So it ended up being a good day despite the slow uninspired start.

Illinois Josh Hull showed up instead of Purdue Josh Hull. He looked completely confused and was consistently getting wrapped up by blockers. Getting pulled for Gbadyu seemed to get his attention as he played a lot better in the second half.

Bowman had to cover a lot of ground to make his tackles since Michigan was avoiding him like the plague. But he still led the team with 11 tackles. Truly impressive when you watch the film and see how far he had to run to get to the ball carriers.

If Mike Mauti doesn't start every game for the rest of his Penn State career the coaching staff will be the subject of much criticism in this space. This kid can play. I watched one play were Michigan had what looked like a tight end split wide with Mauti lined up one on one with him. Of course it was a running play coming Mike's way. I watched the tight end run down to block Mauti and just get blown up. I mean Mauti hit him head on and put him on his ass. Then he tackled the ball carrier. I think he and Bowman have a competition going to see who can hit the hardest, because every hit he made could be heard from the top of the stadium.

Bani Gbadyu didn't impress me. He's fast in open space but he gets gobbled up in traffic. He has no business playing middle linebacker. His time on the field was short as he was soon replaced with Hull early in the second half. I just don't understand why Colasanti isn't seeing the field at this point. I've very disappointed in that.

Like the defensive line, the unit started slow but eventually came along. Slow starts can't happen against Ohio State.

The backfield wasn't really tested in this game. Michigan managed to get a mismatch where Odom caught a deep ball against Rubin. Watching the tape it looked like they were supposed to be in zone coverage and Astorino followed his man inside opening up the deep sideline to Odom. After the play Rubin looked at Astorino and stuck his hands out as if to say "WTF?"

But in all Michigan only had 22 passing attempts with most of them coming in the second half when they were behind. The secondary did well holding them to only 89 yards passing, but they were never really tested.

The only miscue I can point to was Kelly clanking the upright from 45 yards out. The kick was straight and just hooked at the end. A lot better than last year when he would have shanked a kick like that 20 yards wide or hit a line drive that landed at the 10 yard line. He's definitely much improved and a slight miss from 45 yards is to be expected from time to time. He did make three shorter field goals on the day, and all time leading scorer and blah blah blah.

It was obvious Michigan didn't want anything to do with Derrick Williams in the return game. Chaz Powell did well with returns of 32 and 43 yards. The kickoff coverage continues to rock with Nate Stupar and Mike Mauti blowing up blockers and ball carreirs left and right. Michigan was actually so concerned about Stupar they were doubling him with two blockers. That's respect.

Jeremy Boone seems to have figured out something in his punting stroke as he's looking like 2007 Jeremy Boone again. He kicked three punts averaging over 44 yards per punt with a long of 53. He greatly outplayed the great Zoltan Mesko - Space Emperor (of Space!) who shanked two kicks (including the free kick off the safety) and had a kick blocked by Nate Stupar.