Grading the Offense Against Ohio State

Share All sharing options for: Grading the Offense Against Ohio State 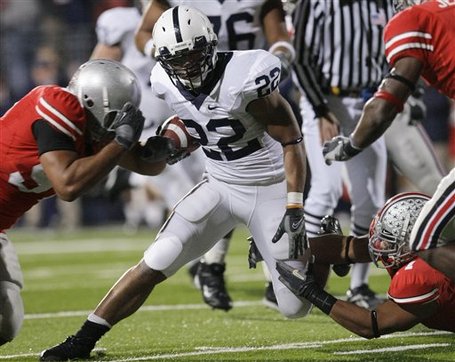 We all expected more offense in this game, but I think we can all agree the end result came out ok. Let's take a look at how the offense did.

The line had trouble creating running lanes as Ohio State did an excellent job of clogging the middle. But they were getting a nice push allowing Royster to gain three or four yards when there was seemingly nothing there. I thought Landolt was having problems holding a few blocks on Gibson, but Cadogen had an excellent game. Penn State was often pulling him down the line as a lead blocker. It's quite satisfying watching a linebacker line up thinking he's about to bring down Royster for no gain just before big ol' #76 comes around the corner and pancakes him. Ohio State is claiming moral victory because they held us sixty yards under our season average in rushing yards. I'm claiming moral victory because we rushed for sixty yards over their defensive average.

They had their hands full with pass protection as Ohio State was blitzing heavily on passing downs. Again I thought Cadogen did extremely well. Everyone else was ok and they only gave up one sack.

As I mentioned before Evan Royster had a tough time finding any open space to run. The Ohio State defensive line did an excellent job of blocking the running lanes. But he did what good backs do in those situations. He followed the push of his offensive line and got three yards where other backs would try to bounce outside and lose two. He was never once tackled for a loss. But there were a few cases where he missed a blitz pickup, and he made a poor decision in cutting a screen pass inside instead of following his blockers in the red zone. He may have cost us a touchdown there.

I was really pleased to see Stephfon Green come in the game early in the third quarter with the game on the line. I thought it was a nice change of pace that had potential for a huge payoff if he could hit a home run. He didn't hit any out of the park, but he did have a nice 12 yard gain that helped swing the field position in our favor. Then he had some nice five and six yard gains to finish with a healthy 7.7 ypc.

But Royster came back in late when the game was on the line and Penn State was clinging to a slim four point lead. Resting him up in the third quarter turned out to be a brilliant move. Starting at the PSU 37 yard line they handed the ball off to Royster on seven out of eight plays with the other play being a quarterback sneak for a first down. Royster gained 28 of his 77 yards on that final drive eating up three of the final four minutes and set up a Kevin Kelly field goal to ensure at worst an overtime period.

Ohio State got pressure on Clark early and often and I didn't think he handled it well. He never looked comfortable in the pocket or decisive in his throws. He overthrew a few guys and almost threw an interception. Luckily Deon Butler is a converted defensive back and broke it up even if he did have to interfere to do it. On third down passing Clark completed 3-of-5 but only got one first down and he also took a sack. Not a great day.

But Clark did have his moments. The throw to Zug was a great read even if the ball was underthrown. And he picked up some crucial yards and first downs by running the ball.

Pat Devlin came in after Clark got his bell rung. He did a fine job handing off to Evan Royster and sealing the win. His one pass attempt drew a pass interference call, and unlike Pryor he dove over center for the touchdown instead of trying to get too much.

I was a little curious in the way Clark handled getting benched. He was clearly upset by it. By all accounts it was a medical decision, but I'm not 100% buying that. Clark stayed in the game after getting hit. The next handoff looked a little awkward, but after that he completed a couple of nice passes to Butler and Williams and had a nice 12 yard gain on a draw play. The third quarter then came to an end. You would think the doctors would have had a chance to evaluate him during the timeout. If he really had a problem they should have pulled him then. But he went back in the game and finished off the drive for the field goal.

But then Devlin came in the game and just handed off the ball. Even if Clark was struggling in the passing game he could have done that. Maybe the coaches throught putting Devlin in would make Ohio State worry about the pass more and open up the running game. It seemed to work as Royster promptly ripped off a nine yard gain. Maybe I'm giving them too much credit?

I mentioned Clark's attitude after throwing the pick against Wisconsin. here again I didn't like the way he handled being benched. The team looks up to him as a leader. He can't be stomping around throwing cups and kicking helmets on the sideline. He needs to cheer on his teammates and stay focused. I was very disappointed by this.

The trio of Williams, Butler, and Norwood were virtually non-existant combining for six catches and 28 yards. Usually you can count on them to block well but Butler whiffed twice on his block for a couple of bubble screens to Norwood and Williams. Butler had a pass interference penalty, but that was arguably a good play on a poorly thrown ball. It was just not a good day for any of them.

Graham Zug saved the group from a failing grade by making the huge play to set up the game's first score.

I've watched the game twice and I'm still sitting here trying to figure out if the offensive coaching philosophy was idiotic, brilliant, or just lucky.

On one hand, pucker pucker pucker. It was a classic Joe Paterno game where they only score 13 points and hope the defense can hold on for a victory on the road. They ran the ball 37 times versus only 20 pass attempts. On first and second down the split was 30-15. They even ran it three times on third and long situations. Pucker pucker pucker. Even more discouraging was how they kept running over right guard over and over. Even after Williams took the opening snap and busted a pitch right for 14 yards they almost never went back to it.

But on the other hand, it seemed to wear Ohio State down. Maybe sitting Royster in the third quarter was just a way of resting him up for the punishing fourth quarter drive.

I can't argue with the results, but the Wisconsin game should have proven to us we can open up the play book on the road. A two touchdown lead would have been a daggar to the heart of the Buckeyes. Their offense isn't capable of passing when it needs to come from behind. Keeping it a low scoring field position game played directly into their hands.