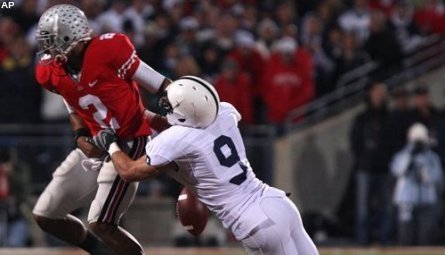 Mark Rubin has been named the Big Ten Defensive Player of the Week.

Rubin collected a career-high 11 tackles and made the play of the game when he forced a fumble in the fourth quarter, which Penn State turned into the game-winning scoring drive to remain undefeated and stand alone atop the Big Ten standings. The senior safety registered nine solo stops on the night to spearhead a Nittany Lions defense which held the Buckeyes to only six points, its fewest points at home since 1982. PSU limited OSU to 61 rushing yards on the night, more than 100 yards below its season average, and forced two turnovers. The biggest turnover occurred in the final stanza. After Penn State missed a potential game-tying field goal at the start of the fourth quarter, Ohio State held a 6-3 lead and drove to midfield before Rubin hit the Buckeyes quarterback to force a fumble. Linebacker Navorro Bowman recovered the loose ball at the 38-yard line with just over 10 minutes left. The Nittany Lions scored a touchdown on the ensuing drive to claim a 10-6 lead on the way to the victory, PSU's first win in Columbus since 1978. Rubin collects his first career weekly laurel.