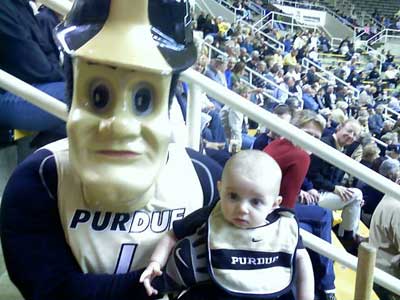 BSD Mike:  Last week the pundits said Penn State would face their first real test in Illinois. It would seem that we passed, but now those same pundits are saying, "Yeah, but they haven't been tested on the road." Fine. Tomorrow we'll play Purdue. But come Monday I think they'll still be saying we haven't been tested because I don't see this as being much of a game.

Everyone is hoping Joe opens up the playbook on the road this weekend and avoids the conservative play calling that has dogged this team in the past. But honestly, why? Notre Dame rolled up 201 yards rushing, 476 yards of total offense, and 38 points against the Boilermakers. This is a Notre Dame team that ranks 105th in the nation in rushing yards per game. If you extrapolate those numbers Penn State should get about 3000 yards rushing in this game.

I look for Evan Royster to have his best day in a Nittany Lion uniform. I'm talking 200-plus yards with three or four touchdowns. I fully expect Curtis Painter to have 50 passing attempts and 350 yards passing, but he'll also throw at least two interceptions. The first half will feature some back and forth like last week, but Penn State will wear them down and pull away in the second half.

Kevin HD:   Ah, the dreaded noon road game. When the all-white uniforms take the field I can't help but feel like the team, the last couple of years anyway, is walking on glass. I have hope, however. For those of you who weren't able to catch this week's Penn State Football Story, or read yesterday's quote, there's a new swagger in town and it's spelled C. L. A. R. K. This, to me, is a big moment. The pundits have been calling it a 'test', but I don't think that's the right word. On paper, tomorrow should be a rather lopsided game.  What I'm going to remember about Week 6 is not the score, but rather the confidence the team displays in their first true road game. Unfortunately for this very talented team, the Big Ten schedule sucks. And ESPN didn't help by making the two toughest games, which were already on the road, 8pm kick-offs. If Clark & Co. can go out there, start strong, and play their game, it will speak volumes about our chances in Madison and Columbus.

There are a couple of other practical things to look at, however. It's still a challenging game, on the road, against a team that is capable of taking advantage of our weaknesses. The secondary will get it's first true test and the offense...well, the offense is probably going to gain a lot of yards tomorrow. There is hesitation to do what JoePa always does on the road: run four different plays over and over again and grind out a win.  To me, it's important that we don't do this. I know it's tempting, but the play callers need to be able to use the full playbook and the players need to be comfortable taking chances in a foreign enviornment. Regardless of strategy, I think this one turns out alright.

For whatever reason, Tom Bradley always seems to have a pretty good plan to slow down Purdue's pass-happy offense, even when you look back to the Drew Brees years.  The following statement will sound unbelievably obvious and stupid, but here it goes:  Penn State needs to score touchdowns.  Don't fall into the situation that Wisconsin stumbled into at Michigan last week.  The Lions are going to move the ball, practically at will.  Turn those drives into touchdowns, and life will get very, very easy in the second half.  Let the home team hang around, and there's a potential problem in West Lafayette.  I have to disagree with Kevin's plea to open up the playbook.  Go with what works, get in the end zone a few times, and allow the defense to maul Painter in the second half.  Make it look like the fourth quarter against Tennessee two years ago.  There's absolutely no reason to get fancy in this game -- not with Purdue's abysmal rushing defense.  Run the ball, kill the clock, and get the hell out of there with a win.

Your predictions and random open thread hilarity are welcome in the comments.