Grading the Defense Against Purdue

Share All sharing options for: Grading the Defense Against Purdue 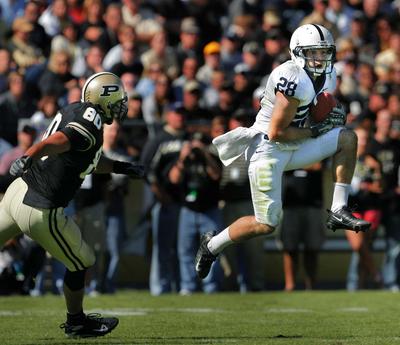 Ladies and Gentlemen, we are intercepting in space
(Photo via PennLive.com)

It was a gritty win on the road against an opponent that admittedly has more questions than answers. Let's go through the defense and see how they did.

Once again it was a solid performance by everyone in the trenches. Kory Sheets was held to half his season average and pretty well contained all day with one or two exceptions. Jared Odrick was a monster in the middle clogging the inside running lanes all day. Abe Koroma was also very impressive.

In the passing game I felt like the line wasn't consistently getting good pressure on Painter. But they had a few moments here and there and Maybin got another sack while Gaines and Odrick split another. But Maybin pretty much disappeared after that early sack and we didn't really hear for him the rest of the day.

Josh Hull easily had his best game of the season recording 11 tackles, all solo. He looked much more decisive than he did against Illinois and had two tackles for loss to show for it. But then, last week you had to guess whether the option was going to Juice Williams, Daniel Dufrene, or Arrelious Benn. This week the option was between Curtis Painter or Kory Sheets. It's a safe bet to assume Sheets was getting the ball 90% of the time. But regardless, Hull played a great game.

The coaches rested Navorro Bowman a few days during the week leading up to the game to allow him to heal up some bumps and bruises. Maybe he was a bit rusty because of it since he didn't seem his explosive self. But he did manage a few big tackles.

Bani Gbadyu was flying all over the field like a pinball...fast and out of control. He ran by a few plays and missed a few tackles. But every once in a while he hits his target and it's pretty impressive when he does.

I was really afraid that Curtis Painter was going to torch us for 350 yards in this game. I'm pleasantly surprised to admit I was wrong. The secondary looked a lot more like the group we saw in 2006 rather than 2007. They held the highly efficient Purdue passing attack to just 158 yards. It's great to see Tony Davis out on the wing making plays again. We really missed him last year. His counterpart, A.J. Wallace, is coming together nicely in pass coverage, but when asked to tackle someone he misses more than he hits. After dropping an interception in the third quarter he was yanked in favor of Lydell Sargeant. But I think it's safe to say Wallace has a firm grasp on the starting job going forward.

Anthony Scirrotto looked like his old self laying out people crossing the middle and crashing the line hard in run support. And while we're on the topic of crashing run support, how about Drew Astorino. The redshirt freshman was flying all over the field sacrificing his body and making hits that could be heard from Nebraska. He also forced the only turnover of the game in reading Painter perfectly to make an interception. He did get a little too aggressive in drawing a pass interference penalty, but personally I didn't think the ball was catchable.

Kevin Kelly was solid, even if a hobbled Joe Paterno could have made those chip shots from 20 and 25 yards. His kickoffs, however, are completely unpredictable. You never know if they are going to go out the back of the endzone, land on the 20, or go out of bounds. This week he had one go in the endzone for a touchback while the others landed at the 9, 8, and the 5. Not bad.

Is it me or does Jeremy Boone not look as good as last year. Granted he's not getting as many chances, but his kicks seem to be noticeably shorter. And he's been terrible at landing kicks inside the 20 all season. This week he had two kicks land in the endzone. Remember a few weeks ago they had Kelly pooch punting when they had a short field? I'm starting to wonder if something is up with Boone.

The return game was awful. Chaz Powell replaced Wallace on kickoffs and returned his one chance just eight yards to the 22 yard line. Derrick Williams wasn't much better. He returned his kickoff chance just ten yards to the 14 yard line. He also fair caught a punt he probably could have gained some yardage on. Annoying, but after the recent mishaps I think it's smart to just catch the ball and let this high powered offense do their thing.

To all those who claim the coaches are loyal to their seniors to a fault, take note that A.J. Wallace (junior) started ahead of Lydell Sargeant (senior) and Drew Astorino (redshirt freshman) played the entire game. They are getting their best talent on the field and for this they deserve credit.

The coaches played nickel defense almost exclusively on first down with Bowman and Hull as the linebackers, Astorino at Hero, and Rubin in the nickel. They rarely blitzed and asked the front four to provide all the pressure. Sometimes they did, and sometimes they didn't. Painter had some success here and there finding the holes in the zone between the linebackers for seven or eight yards. This led to some frustrating moments in the first half when the defense kept finding itself in 2nd and 3 and 3rd and 1 situations. But they came in with the classic Penn State "Bend-Don't-Break" philosophy hoping Purdue would make mistakes. A good bet against Purdue. Their biggest mistake was trying to run the ball on first down. When they did, they often got stuffed for little or no gain forcing long yardage on second down. When Painter is asked to gain five or six yards through the air he can be an effective quarterback. Ask him to gain you 15 yards on third and 10 and he's awful. The coaches realized this and formed the perfect gameplan to beat them.

As for the long drive surrendered to Elliot, Penn State switched to their base 4-3 defense when he came in the game. Perhaps thinking they could rattle the new kid they called a few blitzes and he made them pay with short passes over the middle that gained yards after the catch. It was like Purdue was waiting for us to blitz all day and finally got their chance when Painter came out of the game. We should probably not do this anymore. But I'm willing to give the coaches a break here since the game was in hand and I'm always in favor of pressuring young quarterbacks.