Then, Again: Bucky, Herky, and Sparty Walk Into A Bar

Share All sharing options for: Then, Again: Bucky, Herky, and Sparty Walk Into A Bar

Your weekly look at Penn State opponents, past and present.  In December, who will you blame for destroying Penn State's strength of schedule? 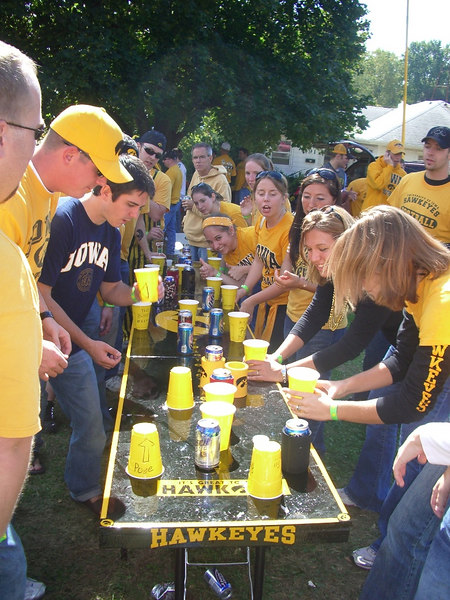 Oregon State (2-3, #24) -- Well, you knew they'd have a tough time going on the road against a pretty good Utah team after stunning USC.  The Beavers really had the game won, but Utah put up 11 points in the last two minutes and kicked the winning 37-yard field goal after stuffing the Beavers and forcing a punt.  That's right, stuffing the Beavers.  Life gets infinitely easier for Oregon State, as they get to take on the dregs of the Pac-10, Washington State and Washington.

Syracuse (1-4, #121) -- Took last week off, but they have the opportunity to drag West Virginia's Bill Stewart into Hot Seat consideration when they travel to Morgantown this weekend.

Temple (2-4, #96) -- They win!  Go Temple!  They're still rolling with backup QB Chester Steward, but it appears that he's coming around.  They beat Fake Miami, 28-10.  They're likely in for a beating at Central Michigan on Saturday, though.

Illinois (3-2, #30) -- The recap of their victory starts thusly:  "Juice Williams beat Michigan with an accurate arm, quick feet and a cool head."  Perhaps that's all you need to know about Michigan's defense on Saturday.  They made Juice Williams look like Major Harris.  We had a sneaking suspicion that Illinois, despite its losses, was a pretty good team.  The Illini host Minnesota at noon on Saturday.

Wisconsin (3-2, #29) -- If you're nervous enough, you can talk yourself into believing that your team could fail for any reason.  For example, does anyone really believe that Wisconsin will lose three games in a row?  Consecutive losses at home?  But that's what they'll try to avoid when they play Penn State Saturday night.  Maybe they're just not that good.  Consider that yet?

Michigan (2-3, #63) -- And Michigan?  Who knows what the hell is going on up there.  You're likely to keep seeing these bipolar results until Rich Rodriguez is fully settled in.  One week, beat Wisconsin.  Next week, get blown out by Illinois.  This week?  Take a breather by taking on the 1-4 Toledo Rockets.

Ohio State (5-1, #12) -- Like it or not, they're still the boss of the conference until somebody knocks them off.  Terrelle Pryor's the new star in Columbus, and he led his team 80 yards for the winning touchdown at Camp Randall.  Pryor's stats in the game were just weird.  Fifteen rushes for 20 yards (he lost 24 yards on four sacks), but a 68% completion rate.  Anyway, they host Purdue this weekend.

Iowa (3-3, #47) -- Look on the bright side, Iowa is awesome at turning the ball over.  Eight in two conference games.  Their loss at Michigan State was their third in a row, and while they get to play at Indiana this week, their next games are Wisconsin, at Illinois and hosting Penn State.  And let's face it, there's a real possibility that they won't beat Indiana, who might suck but can usually put up a fair number of points.  If Indiana gets to, say, 24 points, how much faith do you have that Iowa can match it?

Michigan State (5-1, #26) -- Sparty cracks the polls this week, appearing at #19 in the Coaches Poll and #23 in the AP.  It gets interesting from here, however.  They travel to Northwestern on Saturday, and will then finish the season against Ohio State, at Michigan, Wisconsin, Purdue, and at Penn State.