Grading The Offense Against Purdue: Traction Is Optional

Share All sharing options for: Grading The Offense Against Purdue: Traction Is Optional 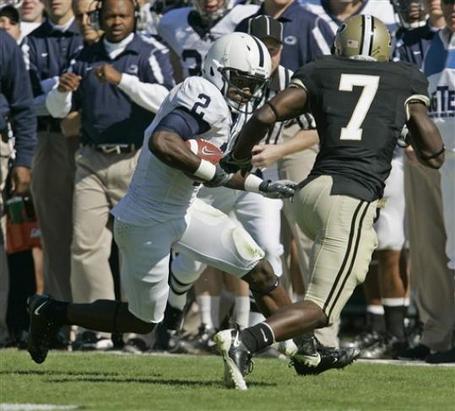 Better late than never and all that...the offense showed capable but you don't earn high marks in this post for playing Paternoball. Penn State has an explosive offense and there is nothing wrong with using it.

The line continued to dominate in the traditional sense, allowing Royster and Green to average 7.8 and 7.7 ypc, respectively. There were timely errors, however. Clark was sacked twice in the game, one near the 20 yard line on 2nd and short. The other major mistake was a false start on a 2nd and goal at the Purdue 5 yard line; the drive was stalled and Penn State was forced to settle for a chip shot field goal.

I continue to be impressed with the line's ability to get down field for the occasional screen pass. With such a strong ability to protect the pocket, keeping defenses honest usually isn't a major issue. Just in case, though, the screen passes are a deadly weapon and one any defensive coordinator has to respect when preparing a game plan. I don't have the ability to go back and look at every single pass play, but it's worth noting that Royster, on 16 receptions , is averaging 11 yards a touch. I know these aren't all screen plays, but you get the idea. For comparisons sake, Chris Wells is at just 2.5 yards per catch on (sample size alert) four receptions and Javon Ringer is at 8.6 on seven receptions.

Clark seemed to catch a little bit of heat immediately after the game on this site but I'm not sure it was warranted. He was a bit erratic and had problems throwing to ball to Deon Butler, but he still managed a 69% completion average, no interceptions or fumbles and a rushing TD. Yes, he could have played better, but the play calling was rather conservative and JayPa & Co. continued the trend of calling more passing plays of the classic variety; they are hardly using his rushing potential to the extent that they most definitely could. No, it wasn't an extraordinary performance but this game was never about that; the plan was mistake free ball and the script was followed rather well in my opinion. The only major criticism I can even come up with was his problem avoiding the two sacks; he could have been a little more aware of the significance of losing yards on 2nd and short. Other than that, though, he showed poise and didn't take any difficult situations into questionable decision making territory.

I couldn't help but think, albeit without a lot of substantive evidence, that the receivers need Norwood out there. Whenever it came to grinding out long drives and picking up those 5-7 yard third downs, the team felt inept. In fact, Royster ended up as the game's leading receiver, 4 receptions for 53 yards. While the back is a safe bet, you have to think Clark is beginning to miss his sure handed receiver across the middle. I'm sure Clark wanted to be careful with the deep ball, but the game lacked a big passing play and no one was able to turn a reception into a touchdown. The passing game looked flat and TE play was almost non-existent.

Now part of this is of course on the quarterback, as we know from prior experience a receiver is only as good as the passes thrown to him, but I know Clark has the ability to take advantage of good routs and open spaces and I so you have to think part of the problem was the performance of the route runners (although it's awful hard to tell on TV). One positive, Brackett and Zug are at least capable of being options.

The ground game was the engine of the offense this week and it's no surprise that Evan Royster is probably becoming one of the more valuable players in the Big Ten. Yes, Illinois and Purdue are hardly the defensive elite of the conference, but he actually seems to look better than his stats would indicate; if that's possible. He cuts well, is patient but doesn't wait, and can accelerate once things clear up. He boasts the best ypc in the conference (7.8). Green looked good in space but was really having problems with his "power game", especially on Purdue's crappy turf. In fact, both backs seemed to struggle in short yardage situations.

Overall, nothing to complain about here. Penn State was going to play it safe and that meant the running backs had to be both consistent and explosive; both feature backs averaged close to 7.7ypc and both registered longs in the high 20s. They didn't seem to adjust well to the poor field conditions but I'm not ready to start docking points for Boilermaker gamesmanship that wasn't in their control.

Every time I've rated the offensive coaches this season my response was usually along the lines of "better than expected". I'm breaking that trend this week. Part of this is bias reaction; if you remember from the predictions post I was hoping for a more open game plan. Instead, we were given a tricky but not quite aggressive game plan that cam across as simply too cute. While that is forgivable (even I will admit low risk was probably the "smart" play here), there were some subtle things that I found quite troubling. One of my comments when grading Clark a couple of weeks ago was that, with this line, he is probably an automatic first down on 3rd and 1. Yet, on some crucial plays involving that down and distance, we were instead watching tosses to Royster or Green attempting to play the role of FB. Just let the QB run behind A.Q. and be done with it, no reason for trickeration when, as Tony Hunt would say "they [aren't ] nearly as tough as us". Yes, with a real field most of those plays would have probably worked, but the fact is the field sucked and that needs to be taken into consideration. I don't have a clear diagnosis for the red zone TD troubles, but two field goals inside the ten yard line is at least one too many. Yes, Penn State scored more points than Purdue, and yes I'm ok with sitting on a lead when the defense is playing capable, but there were little things that I think could have been done differently and would have resulted in a lot more points.