Indiana: Picking You Up When You Fall Down, Since 2004

Share All sharing options for: Indiana: Picking You Up When You Fall Down, Since 2004

I've been able to repress what was left on my Dark Year memories. The 2005 season was the jolt of excitement we all needed and, although very much disappointing, Morrelli's back-to-back nine win seasons were enough to distance the awful experience of back-to-back losing seasons*.

What can't be forgotten, though, is how we were able to turn it around. For the casual follower of the program, that moment is synonymous with this event:

But for most of you reading this, you know that moment was just an exciting effect of the program's return, not the actual cause. To find the very bottom of the curve, you have to go back with me, way back, to November 14th, 2004, at approximately 12:10pm eastern.

Paterno had lost 16 of his last 20 games**, all of his last six, and was headed to Bloomington to face a team he had never lost to. 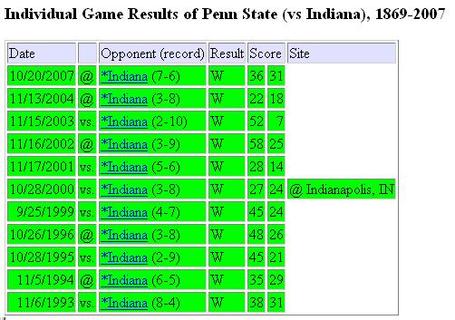 Indiana was having an equally difficult season, but was able to beat a then ranked Oregon on the road and, more recently, took out Minnesota at home. Normally the thought of a hapless Indiana team, even in 2004, would lead to cautious optimism. The problem, though, was that this Penn State team simply couldn't score. At all.

So, sitting on my couch with three of my also terrified friends, we opened our noon beers and got comfortable for what would surly be a long, torturous ride.

The game was going exactly as planned, hardly any offensive yards for either team, until our quarterbacks starting throwing to the wrong team. In what was becoming the worst case scenario, Indiana was smelling blood, at home, and scoring the only way we couldn't allow: against our offense. Indiana capitalized on the first Mills interception, but the almost shoulderless quarterback responded with a 33 yard TD pass to (remember these plays?) Michael Robinson.

For reasons I can no longer remember, Anthony Morelli was brought into the game in the 2nd quarter and threw a pick-six on just his second pass; they would miss the extra point. Western PA's next great hope would be pulled before the end of the half.

Dread was starting to set in until Mills was able to pull it together at the end of the 3rd quarter, scoring and allowing future NFL standout Robbie Gould to give Penn State the lead on the extra point. An Indiana field goal and Penn State touchdown (plus a two point conversion) left the score 22-16. Just a six point lead with four minutes left in the game. The Universe had me exactly where it wanted me, giving the false hope of a rare 2004 lead and just enough time left for "the bend and then break our hearts defense"*** to do exactly what it was designed to do.

I have to break for a second and remind you to go back to your 2004 mindset. Even when the team played well they were always a dollar short and you wouldn't dare suggest that they just might pull it out because, frankly, they hadn't done that in like 6 years. So there you are: drunk on your couch, just waiting for Indiana to get the seven points they need to overcome a six point deficit. You curse the team for dragging this thing out and, while you want to look away, you simply can't.

Anyway, you know what happened next, and it was glorious.

A goal line stand against Indiana, a team that had never beaten the one you root for, is not suppose to inspire the dawn of a new era. It almost has to be like this, though. It's only when your team hits rock bottom and, as a fan, you truly understand how much further you can drop do things finally turn around.

Penn State dominated the Spartans the next week, Williams would headline a great 2005 recruiting class and all of the sudden the team was 12-1 and crowned conference champs.

So if Penn State goes all "Michael Robinson 2005 at Illinois" on Saturday, don't think it doesn't matter. Unnecessary wins sometimes do.

*Yes, I know the Dark Years go back much further than 2003, but the 2002 team was actually very good; six Penn State players went in the first two rounds of that draft, four in the first round alone. Since then, only three players combined have been picked before round three (Levi Brown, Paul Posluszny, and Tamba Hali).

**I always find it funny that, in an effort to prop themselves up, Big Ten fans like to carve out these two years into their overall record calculations. Lake The Posts is the latest guilty part, noting just today that "If you pressed me I'd put Ohio State first and then Penn State second in terms of fear of blowout factor, this includes the fact that heading into this season, we've had essentially the same conference record as Penn State since 2003."

Now I know he means well, and everything he says is true, it's just that those stats are terribly misleading. Penn State has finished ahead of (in what will be) each of the last four years by an average of 3-4 spots. Only when you include 2004 are these teams even remotely comparable in performance. To me, it makes a lot more sense to just say Penn State sucked from 2003-2004 rather try to slide it over the surface with a general statement that always seems to date back to exactly 2003.