Share All sharing options for: BSD Staff Predictions Against The Indiana Hoosiers 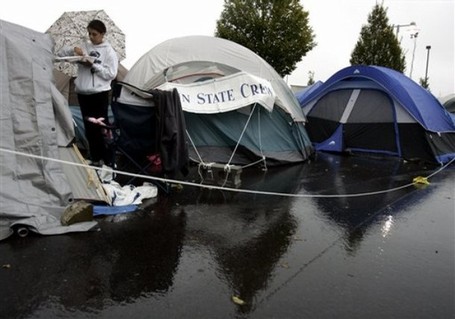 The all important rebound game.  Everyone seems to have calmed down after last week and, with two more in-conference games between this team and a Big Ten championship, there are still good things to be had.  Oh, and don't forget your camouflage parka.

Staff predictions after the jump...

The Indiana Hoosiers are just what the doctor ordered this week. Many people are wondering if this year will be a repeat of 1999 when Penn State went 9-0 before dropping a heart breaker to Minnesota that sent the season into a tailspin. What people forget is that we played a ranked Michigan team the following week. This Hoosier team is not nearly that good. It's more likely we'll see a repeat of 2005 when Penn State lost to Michigan and came back the next week to drop 56 points on Illinois in the first half.

But I don't think things will go quite that well. Many of the seniors on this team were on that 2005 team. They've lost plenty of games since then and they know how to shake off a loss and come back strong the next week. But for many of the younger players I'm afraid this loss may linger on another week until they remember what it's like to win again. I think Penn State will win handily by 20 points, but we're going to come away unsatisfied. This will be like some of those non-conference games in 2006 and 2007 where we win by 20 but you feel like we left points out on the field. I'm expecting Penn State to come out lacking focus and we're going to see a lot of turnovers, dropped passes, and dumb mistakes. But the game will never be in doubt.

Rain? There will be rain, but perhaps it's best to save our good weather for Joe Paterno's possible farewell next week against Michigan State (and yes, we officially have to consider that possibility, beginning Sunday morning). This game will be fun to watch, provided you're in a warm, dry place in front of a television. Don't worry if you're crazy enough to be at Beaver Stadium -- the game will also be very, very fast. If Penn State throws the ball 20 times in this game, I'll be amazed. Indiana gave up 441 yards on the ground against Wisconsin last week. Penn State won't quite reach that total, but they'll be within shouting distance of it. This one's over by 2:45 p.m., which should give the local folks plenty of time to scurry in front of a TV for the 3:30 games.

This is the season of historical comparisons.  Will Daryll Clark be the 2005 Michael Robinson?  Is this offense better than the 1994 juggernaut?  Will the team fall apart like the 1999 team after a similar loss?

I'm going the other way, there is simply too much talent and leadership on this team to think tomorrow won't match the insanity of the 2005 Illinois game.  The team has a lot of frustrations to blow off and I think Paterno is ok with them doing it.  And why not?  For a team that wasn't even in the top three of the pre-season Big Ten media vote, a team who was picked by literally no one to actually win the league, things need to be put in perspective.

Even with Clark probably back to 100%, I imagine the coaches will focus on the running game.  Indiana has a tough time protecting against the pass (or anything really), but with the cluelessness of the offensive line last week, it might be best to limit the number of shots their relatively talented defensive line will be able to take.  I don't think Indiana will be able to score much, anyway.  They don't do a very good job of protecting whoever it is that is going to be throwing the ball and that is usually trouble against Penn State.