Grading The Defense Against the Indiana Hoosiers

Share All sharing options for: Grading The Defense Against the Indiana Hoosiers 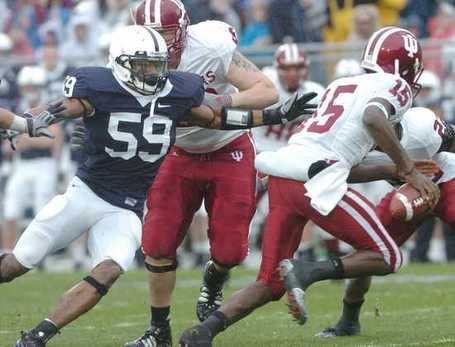 The first rule of Project Mayhem is you do not ask questions.

After giving up 24 points and getting beat up on the final drive in Iowa, the defense was looking to regain some of that swagger before going into the Big Ten Championship game next week. Let's see how they graded out.

If there is a single word to describe the play of Aaron Maybin, it's mayhem. In fact that should be his name. Aaron Mayhem. No...Project Mayhem. Indiana tried everything to contain him including double teams, but his speed was too much to handle. I watched one play where Indiana called a running play to go between the right guard and tackle. They had a tight end lined up next to the tackle across from Project Mayhem. They snapped the ball and Project Mayhem ran outside the tight end, so the tackle released to the second level thinking Project Mayhem had run himself out of the play, but Project Mayhem just ran around the tight end like his shoes were stuck in quick sand and tackled the running from behind just as he was hitting the hole. Mayhem was wreaking havoc like that all day long and even managed to get a sack on the elusive Lewis.

Jared Odrick and Ollie Ogbu dominated the middle of the line of scrimmage. Odrick in particular had an outstanding game disrupting everything Indiana was trying to do. Josh Gaines tried to go on his injured ankle but had to shut it down after the first series. Eric Latimore and Jack Crawford platooned during the game at his vacated spot. They each held their ground but weren't very spectacular.

Maurice Evans showed signs of returning to his 2007 form, but he was practically invisible outside of a play or two. I may be wrong, but it's an observation of mine that he doesn't seem very interested this year. There is no bounce in his step, and when someone makes a big play like Rubin's interception or Hull's sack he doesn't celebrate or congratulate his teammates. Maybe it's nothing, but his uninspired play is undeniable.

In all the defensive line played a great game getting two sacks and holding Indiana to 123 yards rushing on the day (with 57 of those coming on one play.)

Outside of one play they were very good. You can blame that one play on Bani Gbadyu who blew containment by running inside and then completely whiffing on the tackle. This is why Bani Gbadyu doesn't play much.

Every week we wonder if the good Josh Hull or bad Josh Hull is going to show up. Bad Josh Hull showed up in the first half. He blitzed up the middle and disappeared somewhere in the mush of 300 lb. men never to be seen until the next play. He was futily diving at the ankles of Kellen Lewis as he ran past him up the sideline. He was hitting Thigpen five yards down field, and then getting dragged another three yards. But the good Josh Hull showed up in the second half. The coaches sent him on some delayed blitzes with success. I think this is good for him because he can pick a hole and attack it rather than hitting a gap that isn't there and getting swallowed up. Hull still wasn't getting to Lewis, but he rushed a few throws and forced Lewis to throw the ball away on a few occassions. He did get there once for, believe it or not, his first career sack.

Bowman was his usual stellar self always around the ball. I watched one play where he blitzed around the right tackle, but the play was a designed sweep to the left. Bowman ran across the field and tackled Thigpen along the sideline for a short gain. He along with Project Mayhem give the defense two disruptive players unlike any I've seen since the LaVar Arrington/Courtney Brown days.

It's hard to argue with the stats. Indiana only completed nine passes on 23 attempts for 57 yards and one interception. But in fairness, Indiana is struggling with injuries and doesn't really have many weapons on offense.

Mark Rubin may be our best defensive back. How many people thought you would read that on this blog before the season started? Time and again this year he has come up with big plays on defense, and Saturday he stepped up again. He made a great read and jump on the intereception. And later in the game on a crucial third down play he made an outstanding open field tackle on Kellen Lewis. Honestly, he tackles better than most of our linebackers, which is awesome and sad at the same time.

Tony Davis also played an excellent game making a few crucial open field tackles. I didn't notice anyone else, which is usually a good thing when you are a defensive back.

If there is an unsung hero on this team it's Nate Stupar. He's a one-man special teams wrecking crew. He got another blocked punt this week. And at the end of every kickoff you saw #34 getting off the bottom of the pile along with #42 Mike Mauti. It's going to be a fun spring watching these two guys fight it out for the outside linebacker spot vacated by Ty Sales after this season. 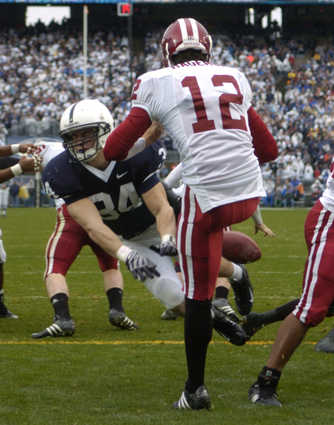 Jeremy Boone averaged 51.5 yards on his two punts. Kelly missed a field goal but had a nice pooch punt down to the Indiana two-yard line. The kick return game was meh, but admittedly only got two attempts, and one of those went to Dan Lawlor.

There was a little feeling of "Oh crap, here we go again" in the early going, but they settled in nicely. Indiana only recorded nine pass completions and six first downs. The defensive line was very effective in their mush-rush to contain Lewis. Once he realized Indiana wasn't much of a passing threat, Bradley let the defensive backs play some man-to-man and cut the linebackers loose to blitz. Say it with me now, WHERE WAS THAT LAST WEEK? The stat sheet speaks for itself.

But there were still situations in third and long where they trotteed out the nickel back and backed the corners eight yards off the line of scrimmage. Like smoking in public and clubbing baby seals, this should be banned by the international community. But the end result was just seven points on a fluke play, and outside of that Indiana never really threatened to score. But considering the opponent, that isn't saying much.

What does all this mean for Michigan State?

Unfortunately not much. The Spartans are much more talented and physical than the Hoosiers. You can expect a steady diet of Javon Ringer left, Javon Ringer right, Javon Ringer up the middle next week. They're not quite one dimensional though. If Brian Hoyer is on his game you can call them one-and-a-half dimensional. If I had to compare them to a team we've played so far, it's Iowa. So, yeah.