Grading The Offense Against Indiana

Share All sharing options for: Grading The Offense Against Indiana 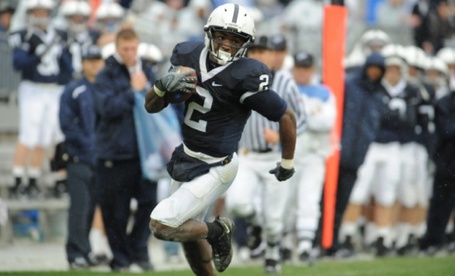 Another tale of two halves..  It's probably a little troubling, a start like this against even an average team could be trouble.  But then again, it was a hangover game if there ever was one and it was the most points Penn State has been favored by against a Big Ten opponent since 1994.

Clark took a lot of heat last week and whatever it was that caused him problems against Iowa seemed to bleed into the first half of this game. His passing was erratic and the fumble on the goal line was a major mistake. Everything felt forced and Clark seemed to constantly be throwing off the wrong foot and sometimes even leaning backwards. He also seemed to get caught in the pocked more than a mobile quarterback should.  There was a moment in the second quarter when you wondered if he was going to be able to pull himself together.

But then he did. He finished with solid stats and overcame some receiver drops for what turned into a great second half. You can tell mistakes bother him a lot; this is probably not healthy. He needs to be able to forget whatever it is he has done and move on. You can tell he's probably not doing this. Exhibit A: 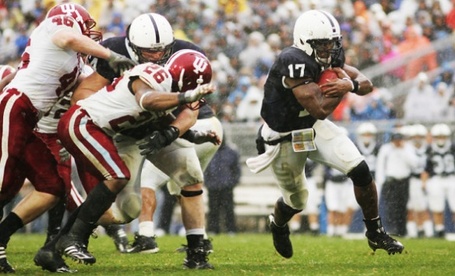 Notice anything?  I'm convinced this isn't a talent issue at all but simply Clark over-thinking everything.  At the beginning of the year he was attacking, not holding anything back, and now all of the sudden he is struggling to make the 8 yard pass and losing the ball.

Also, the interception was simply bad luck.  Maybe it was a little under-thrown but that one is hard to hold against him.

The regression of the offensive line is probably the most troubling thing about these last two weeks.  Not that they aren't still playing okay, it's just that they were so strong at the beginning of the season and now there are multiple instances of defensive linemen going untouched and very few big holes being opened up.  Royster was almost killed early in the game when this unit broke down in short yardage, and there were also several instances where Clark didn't even have enough time to get himself out of the pocked.

Now 207 yards (excluding sacks) isn't anything to be ashamed of, but it seems like there are almost no big running plays anymore and a lot of that is due to the fact that the running backs are fighting for every yard rather than getting the space we saw earlier in the season to create the home run.

The breakdowns on the offensive line are probably hurting Green the most.  He needs space early to be effective and he isn't getting it.  His longest carry of the day was six yards and he was held to an average of just three.  Part of this is on him, of course, if he wants to be the feature back he needs to develop a power game.

Royster, on the other hand, seems to deal with this well.  He didn't break anything for over 20 yards but showed great patience in tight running lanes and was able to end the day with a very good 5.2 ypc average.

While the emergence of The Real Derrick Williams is fun to watch, there seems to be something a little off with the receivers. This is going to be a mixed bag review because the numbers are so impressive, but these seniors are repeatedly dropping passes and it's troubling. Clark had several well placed balls that seemed to fall right through the veterans' hands. Remember this:

Now I know there were some not-so-great passes, but what happened to the hands in the video above?

This was mentioned in Artiefufkin10's FanPost and I agree: Norwood doesn't appear to be 100%, or if he is the coaches don't know it. He's not being utilized as effectively as he was at the beginning of the year. Regardless, he did lead the team in receiving yards with 69, and both Butler and Williams were over 50 yards and recorded a TD each.

Something changed before Ohio State. The team was ultra-aggressive leading up to that game and it was working flawlessly. The Oregon State game was an all out attack, and in the first half alone the coaches called several very deep passes down field. The playcalling was hard to predict and, for the most part, the offense was hard to stop. Then, in Columbus, we saw a return to the Don't Screw Up offense, hardly of the HD variety, and for better or worse it worked. Looking back, the way the team won against Ohio State this season was the exact same way they lost against Michigan last year. If it wasn't for two major fumbles in Ann Arbor, Penn State wins. But that's the problem: betting that you won't make a single mistake is a tough way of call a game. If you play flawlessly then it works, but guess what? You aren't going to be able to pull that off every week.

The effectiveness of the gameplan two weeks ago probably has had an impact on future playcalling and the entire staff has reverted to this grind it out approach. This is bad bad 1,000 times bad.  We had made such progress...

Back to grading the game at hand: The coaches decided they were going to pass when it was probably true that a gameplan that includes 75% run would have covered the spread. Covering the spread wasn't the goal though; the point was to win but also give Clark his confidence back. It almost backfired in devastating fashion. The game was won anyway, and you really can't complain about the number of players who were included in the offense and 442 yards of total offense.