Until The Ride Comes To A Complete Stop

Share All sharing options for: Until The Ride Comes To A Complete Stop

The moment of truth for a nervous roller coaster enthusiast occurs at the loud clack of the safety harness locking into place.  Protest all you want at that point, but you're in for the ride, no matter how harrowing it may be. 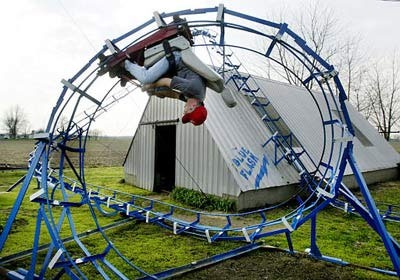 Like it or not, this is the point Penn State is at with respect to the quarterback position.  Protest all you want, Joe Paterno has officially dug in his heels.

Q: Daryll Clark has three turnovers today, are you worried about his confidence?

Clark's play has clearly declined since the Wisconsin game.  However, a case could be made to support Clark in most of those games.  Against Ohio State, the offense went conservative in a tough environment.  The combination of Iowa's excellent defense and the wind made passing difficult last week.  The Indiana game was played in a frigid swamp on Saturday.  These things are all true.  That said, it's going to be cold next Saturday and Michigan State is ranked 12th nationally in pass efficiency defense.  As Daryll (and PSU fans everywhere) learned after the Iowa game, excuses really only fly after victories.

Besides, it's not just Clark's play that has dropped off.  We have learned that the Penn State offense does not respond well to pressure.  Opposing defensive coordinators know it, too.  The offensive line has done a very poor job of picking up blitzes lately, which has led to Clark becoming increasingly jittery when things begin to break down.  Receivers have dropped passes at very bad times.  Wind.  Rain.  Faulty protection.  Bad throws.  Drops.  All of that stuff has contributed to decreased offensive production.  Does that mean Pat Devlin should stay glued to the bench?

Unless Clark massively screws up in the first half against Michigan State, yes.  He is your quarterback, and all of the bitching and moaning will only result in further frustration, because the head coach's mind is made up.  Think of the last two seasons.  Now, do you really think a guy who has led the team to a 10-1 record is going to be benched?

When the quarterback competition was settled back in August, Joe Paterno told us that Pat Devlin would receive ample playing time.  That actually happened for a while, and Devlin was permitted to do much more than handoff to third-team running backs.  As the season trudged onward, Devlin's meaningful snaps steadily disappeared:

Certainly, there's an argument to be made that Devlin could have received more meaningful playing time once the conference schedule started, but remember that Clark was playing at an exceptionally high level until the Michigan game.

It will take an injury to Clark or multiple, brainlocked turnovers for Devlin to get in the game.  Devlin is the #2 quarterback, not #1A, not #1B, or whatever half-cocked designation you wish to pin upon him.  This will probably not change next season, either.  His job is merely to sweep the stage clean after the main performance has concluded, and if you see him taking crucial snaps in either the Michigan State game or the bowl game, something very awful will have already happened to the PSU offense.