Share All sharing options for: Grading The Coverage: The Big Ten Network

Now before we get going: The BTN is a good thing.  I'm not upset about its existence.  Quite the opposite actually.  They cover games that otherwise would absolutely not be available to most of us and so maybe I shouldn't be complaining.  But guess what: I am.  Besides, complaining about TV coverage is fun.

If this was as "circus" as the announcers make it sound, it would have been fun to, you know, watch.  I know that the play-fake has taken it's toll on many a camera man, but this is actually kind of funny.  "Over there, no, over here! Wait, go back!".  Also, I can't see anything.

The ability to see a play develop.

There are about eight too many zoom lenses on that camera.  I'm not concerned with the physical act of Williams running, I'd like to know where he is going to end up.  Running lanes, holes in the coverage...that kind of stuff.

I mean look at this shot below.  There is simply no value in this other than as a some type of complementary photo for a dying local newspaper. 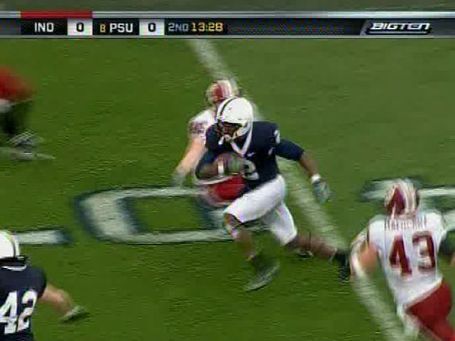 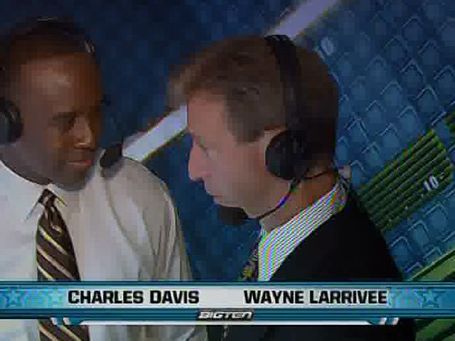 This isn't really relevant and I wouldn't have brought it up except that it looks like one of those in the cockpit NASCAR shots.  I haven't taken a video course before but I suspect that one of the things they tell you to do is get both heads in the shot if two people are talking.  But again, I could be wrong. 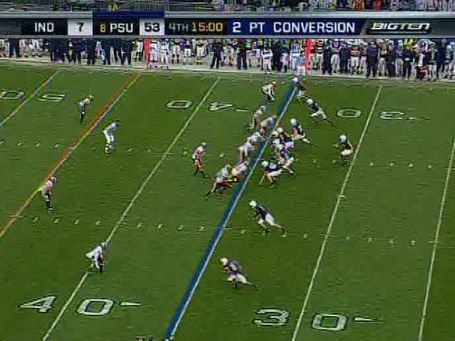 Okay, I'm just piling on at this point but comeon.  This wasn't even after a score, where you could make some type of excuse like you typed it in wrong or hit the 'touchdown' button too many times.  Also: two point conversion?

So in conclusion...I'm probably being too harsh and over-reacting.  It's just a game, the Indiana game, and who cares if they messed up a couple of times.  I guess I'm just amused.  With the help of Fox and millions of dollars in investment from the schools, it shouldn't be that hard to get experienced people in there to cover the game.  It’s not that these miscues happened often, it’s just that three days later one of the couple things I still remember about the game is the several rounds of jokes we all made while sitting at the bar watching the game, although maybe that says more about me than the BTN.

I suppose this whole thing could have been avoided if the game started at 3:30…the bar has a way of making you complacent by then.