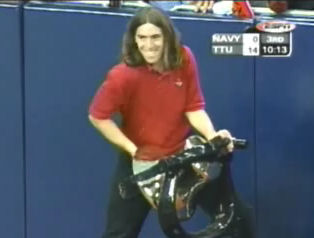 Note: I was going to wait until the BCS actually came out to post on this, but because I’m anticipating a large reaction to the AP Poll alone, let’s just talk about it now. I’ll update as more information becomes apparent [BCS is out, updated below].

Apparently swept up in the drama of Texas Tech’s win yesterday, the AP writers have jumped the Red Raiders over Penn State, giving them twice as many first place votes. It’s not a consensus opinion, however, as the #2 and #3 ranked teams are separated by just three points.

There are a couple of things to remember about Penn State’s #3 AP spot, all really just reasons why we need to remind ourselves to relax. Patience, people.

An undefeated Penn State team is going to take a lot of heat. Hell, they already are. But the bottom line is that if they continue to win their games there isn’t anything to panic about. A one loss team is going to have a very tough time overcoming the computer polls, which will most likely favor Penn State by a wide margin if in fact they are the only undefeated. This will help compensate for any dissent in the human rankings.

Depending on how the Harris Poll comes out, Penn State has a good chance of taking the #2 spot in the BCS and, as they say, will be in control of their own destiny.

Update #1: The Harris Poll is out and, while Penn State is sitting at #2...wow.  Texas Tech is of course at #3 followed by Florida at #4.  Oklahoma sits at #5 despite having a loss to #6 Texas.  But then, as if to make up for this, someone actually kept Texas at #1 in their ballot.  We are truly living in strange times.

Anyway, with both human polls putting Penn State at #2, I suspect they will hold that spot when the final BCS rankings come out tonight. 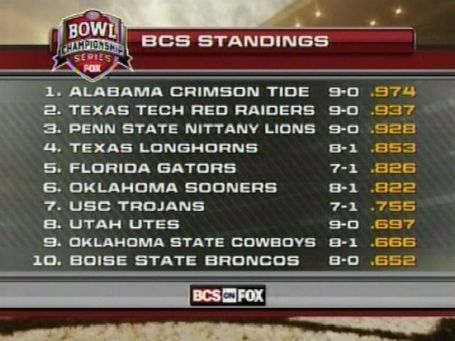 So I underestimated how badly we would be getting owned in the computer polls.  Although #2 in both human rankings, there wasn't enough of a gap between Penn State and Texas Tech to hold onto the two spot.

Although we remain at #3, don't think for a second that this week was a wash.  TT would have jumped Penn State eventually anyway if they win out, so we need them to lose regardless of the current standings.  The difference is that now we root against Texas Tech instead of Texas, and the chances of the Red Raiders falling is a lot higher than those of a second Longhorn loss.