Another great performance from the Nittany Lion defense.  For its deficiencies, it must be said that this unit has not only overachieved this season, but dominated.  Looking only at Big Ten games, Penn State was in the top two in the following categories:  scoring defense, pass defense, turnover margin, rushing defense, total defense, pass efficiency defense, and first downs allowed.

(And a fun thing I just noticed?  Your Big Ten leader in assisted tackles is James Laurinaitis.  Seriously.) 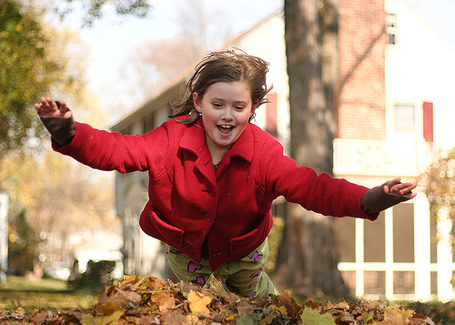 She received four Buckeye stickers and one tackle for loss.

And while we're on the subject, let's bring in ESPN.com's Adam Rittenberg:

James Laurinaitis is a future College Football Hall of Famer and a sure-fire first-round NFL draft pick. He's an excellent football player. He should not have been named Big Ten Defensive Player of the Year. That award should have gone to Penn State defensive end Aaron Maybin. No one else is really in the discussion. Maybin was flat-out dominant this season. I don't care if he's just a sophomore. Base the award on merit, not on reputation or name recognition or having a nice back story.

Not sure Maybin is the best player on PSU's defense this year -- that honor goes to Jared Odrick, in my opinion -- but it's nice to see Laurinaitis knocked down a peg or two in a widely-viewed forum.  He's a good player.  He is not that good.  Anyone who watches an Ohio State game with a semi-critical eye knows this.  There's been a lot of argument between Ohio State and Penn State fans over who has produced the better linebackers over the past few years, and there's really no losing side.  A.J. Hawk was simply awesome.  Same with Paul Posluszny and Dan Connor.  James Laurinaitis isn't remotely close to any of them.

In the spirit of being Fair And Balanced, Rittenberg also says that Joe Paterno should not have been Big Ten Coach of the Year, which I happen to agree with.

If there was an award to give an entire coaching staff, than Penn State's staff should get it. But it's a single award, and one that should have gone to Michigan State's Mark Dantonio or Northwestern's Pat Fitzgerald. You can't tell me Paterno had as much influence in shaping his team as Dantonio or Fitzgerald. This vote was based on sentimentality, not by looking at what each man actually accomplished.

Given that Dantonio has officially cemented his status as The Jolly Green Douchebag, my vote would be for Fitzgerald.  And while the college football world will continue to pay tribute to Paterno over the next few weeks, nobody can legitimately argue that working from home and silently sitting in the press box qualifies as coaching, not when other guys are busting their asses every day and trying to win nine games at freakin' Northwestern.  They had one hiccup against Indiana, otherwise they'd be a 10-2 team and this vote wouldn't be remotely close.

Tremendous all day long.  They were able to generate a pass rush with four players, something that the scheme depends upon for success.  When it works, it's usually a long day for the opposing offense.  They also received a little help from Sparty.  Down 14-0 halfway through the second quarter, Michigan State was moving the ball on the ground and reached the PSU 45 yard line.  They tried to get cute with a playaction pass, and Maurice Evans blew by the tackle and fullback for a sack of Brian Hoyer.  With 21 yards to go for a first down, they went with another useless playaction pass -- nobody in the stadium believed it for a second -- and a screen pass which even I called in Section NC ten seconds before the snap.

Jared Odrick was great again, and was in Brian Hoyer's face when he threw an interception to Anthony Scirrotto before halftime.  As Todd Blackledge noticed, Josh Hull also provided great coverage on that play.

Also, if you spotted #71 on the field during MSU's final offensive efforts, your eyes weren't deceiving you.  That was Devon Still.

As you might expect from the previous paragraphs, their jobs were made exceptionally easy by the defensive line.  Hull was surprisingly good in pass coverage, not only on the play mentioned above, but he also tipped a pass that led to Anthony Scirrotto dusting a guy across the middle in the first quarter.  Tyrell Sales had a great tackle for loss against Ringer in the first half.   Special mention for Navarro Bowman absolutely sawing Brian Hoyer in half on Sparty's third quarter trick play. 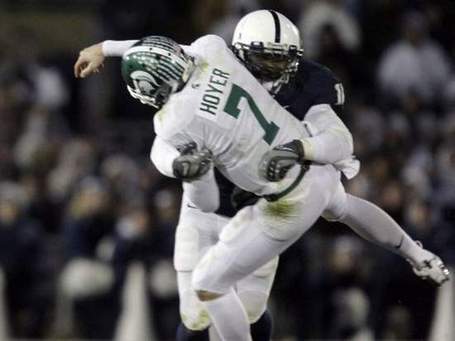 Personally, I ragged on this group throughout the year, although I don't think it was unwarranted.  When they were bad, they were really awful.  When they were good, the defense was just killing dudes out there.  Still, they generally played well in the biggest games (at Ohio State, especially), and there's plenty to be said for that.

(Oh, and we get Sean Lee back next year.)

Held Hoyer to five yards per attempt, and never really allowed him to settle in.  Now, go back a few months ago and imagine me writing this:  I have no idea how we're going to replace Mark Rubin next year.  Scary, but true -- he's gone from utter liability to one of the most dependable players on the Penn State defense.  Nice to see Anthony Scirrotto have some great plays in his final Beaver Stadium game, and let's show some appreciation for Tony Davis' effort this season.  How many times did you hear his name throughout the year?  Good sign for a cornerback.  Also, Lydell Sargeant vastly improved this season.  After a while, people just stopped asking, "Why isn't A.J. Wallace in the game?"

And poor D'Anton Lynn thought he had his very first interception on the last play of the game, but the pass was ruled incomplete.

Was there a more entertaining sight than Sean Lee trying to get Tom Bradley to accept the rose during Sparty's last drive?  Give all of the defensive coaches a ton of credit for Penn State's dominant defense.  They were thin along the defensive line after the knuckleheads were sent packing before the season.  The secondary that I personally thought would be a disaster held up pretty well. 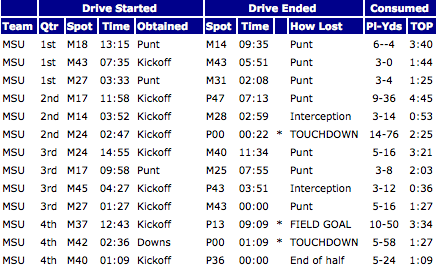 That's one meaningful drive while the game was actually in question.  Excellent work, all around.