It certainly wasn't pretty the way Penn State closed out their final sixteen games, but upsets over ranked opponents Michigan State and Indiana combined with three wins in the last four games give reason for hope this season. The injury to Claxton along with a late season injury to Jamelle Cornley forced Penn State to give heavy minutes to their talented freshmen. They are hoping that valuable experience pays off this year. 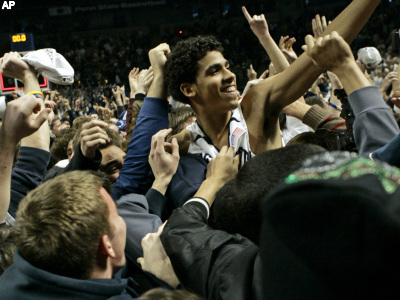 Talor Battle figures to be a huge factor for Penn State after a sensational freshman season. He will be joined by seniors Stanley Pringle and Danny Morrissey. Sharp shooter Mike Walker has moved on after graduation, but Penn State is counting on freshman Chris Babb to fill in the outside shooter role. Freshman Cammeron Woodyard will also hope to crack the lineup.

The key word for this group is consistency. The duo of Battle and Pringle was fun to watch push the action, but they often turned the ball over too much. Pringle in particular has a tendency to get out of control and dribble the ball off his foot when he gets in the lane. Morrissey is as streaky a shooter as they come. He can be cold through 30 minutes and then hit five in a row and end the game with 20 ponts. Pringle took a lot of him minutes last season, and if Chris Babb is as good as advertised it's going to be even tougher for him to get playing time. He'll have to make the most of his opportunities this year.

Speaking of Chris Babb, he should eventually be a major upgrade over Mike Walker. Babb will lack the experience in the early going, but his athletic ability should allow Penn State to put a true shooting guard on the floor and not have to sacrifice any athletic ability on the defensive end. He should allow Penn State to play a lot more man-to-man defense than in the past when teams were allowed to shoot at will over the Penn State zone defenses. Babb was a scoring machine at the Oakridge School in Arlington, Texas averaging 31 points, eight rebounds, and seven assists per game as a senior. Penn State is also hoping to get a contribution from freshman Cammeron Woodyard who averaged 20 points, five rebounds, and three assists as a senior at Winters Mills High School where he led his team to the Maryland 2A State Championship.

This should be the best back court Penn State has seen since Danny Earl and Pete Lisicky were running the show.

Though it clearly sucked at the time, losing Geary Claxton and Jamelle Cornley last season was the best thing that could have happened to the 2008-2009 Nittany Lions. The injuries forced Ed DeChellis to play the three talented freshmen; Andrew Jones, D.J. Jackson, and Jeff Brooks. They struggled to find their groove early on, but by the end of the season you could see these guys gaining confidence and being more aggressive. Now they are all seasoned veterans and Jamelle Cornley says he is 100% healthy giving Penn State a formidable foursome to play down low. But the others will have to show progress if Penn State is going to be successful. 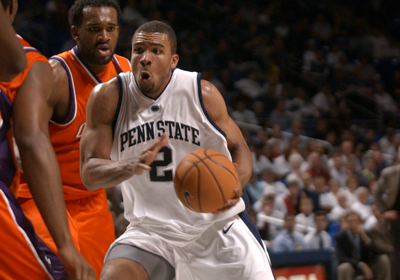 Andrew Jones will have to become a dominating force in the paint. But he's only 6'9" tall so he's not exactly a natural fit for the center position. He's put on a lot of weight and a lot of muscle and he's going to need it to compete with the other big men in the league. He plays with a lot of fire and emotion, but he tended to disappear at times last year. He averaged 4.0 points and 3.7 rebounds in only 17 mintues per game last year. Penn State will need him to at least double all of those numbers with the key number being rebounds in my opinion.

D.J. Jackson was a solid player last year and I would expect nothing less this year. He was one of our most consistent and best all around players. But he'll need to work on creating shots and being more aggressive in his play. Though he redshirted his first year, it was due to a fractured leg that caused him to miss the entire season. Last year was really his first year in the program, so I expect we'll see more improvement from him.

Everyone was expected big things from Jeff Brooks last year, and we were all majorly disappointed. It was obvious he wasn't ready for the speed and physical play of college basketball. He really could have used a redshirt season, but injuries and depth issues forced DeChellis to play him. This year he coaches and teammates say he's greatly improved in his confidence and conditioning. We'll see if they are correct or if they are just trying to further his confidence. I seem to recall two years of hearing coaches and teammates talking up a certain quarterback on the football team that never lived up to the billing.

The only losses from a year ago are Brandon Hassell and Joonas Suotamo. Neither guy could score or rebound or even play defense, so nobody should consider these to be huge losses. You can expect freshman Billy Oliver (6'8" 210 lbs.) and sophomore Andrew Ott (6'10" 230 lbs) to also see some playing time. Ott is a transfer from Villanova and will have to sit out the fall semester due to NCAA transfer rules.

A major addition that doesn't necessarily show up on the roster or the stat book is new assistant coach Lewis Preston who has a history of developing low post players at Notre Dame and Florida. He wasn't a good fit for Florida, but a guy like him may be able to work wonders at a school like Penn State. If the low post players show major improvement he will undoubtedly deserve a lot of the credit.

The team is talking big this year. Late season wins over Michigan State and Indiana along with all the talent coming back have them thinking a berth in the NCAA tournament is within reach. But I'm pretty skeptical.

The non-conference schedule is a joke with teams like Mount St. Marys and New Jersey Tech. But there is a potentially tough stretch where they play at Penn before playing in the Philly Classic against Rhode Island and potentially Villanova. Then they travel to Georgia Tech before playing Temple at home. This could be a disasterous season killing string of games if the Lions play poorly. But if they can come away from that run with two or three wins I think they can feel pretty good about themselves going into the conference slate.

The Lions managed seven wins in the conference last year, so you have to consider anything less than that to be a failure. But it's not going to be easy. Last year was a down year for the conference as a whole and Penn State was able to sneak a few wins over teams like Michigan, Iowa, and Illinois. Those teams should all be improved this year along with Minnesota and Ohio State. Purdue and Wisconsin are completely out of our league, but Indiana is rebuilding and should give us an opportunity for some wins. Once again the scheduling Gods are cruel and only give us one game against perennial conference doormat Northwestern to start the Big Ten schedule. This used to be the game both teams counted on to avoid a last place finish in the conference. I'll be disappointed if this is anything less than a 20 point blowout in our favor this year.

Is the NCAA tournament out of the question? No, but it's going to take a lot of work. The weak non-conference schedule is going to hurt them. Even if they can get ten or eleven wins, there just aren't enough scalps on that list to boost the RPI. A slip up against one of them will be a major coffee stain on the resume. They will have to beat all the teams they are expected to beat and somehow manage an upset or two over the Villanova-Georgia Tech-Temple run. Then they have to look impressive in the conference. That will take at least eight or nine wins with an upset or two over a major player like Michigan State, Purdue, or Wisconsin.  And even then, they may have to win a few games and advance far into the Big Ten tournament at the end of the year. This would show a major improvement over a team that went 15-16 last season. I think they will be better, probably in the 18-19 win range, but I don't think they'll look impressive enough to qualify for the NCAA tournament. But mark this team down for a sixth place finish in the conference and an NIT bid.