Share All sharing options for: Internet Rumbling: Pat Devlin Has Left The Program 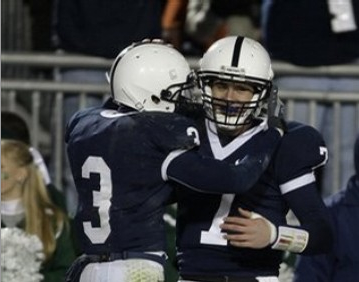 FightOnState is reporting that Pat Devlin has left the program.

He came in highly recruited out of eastern PA but apparently never convinced the coaches he was a better option than Clark.  Without him, though, the teams chances of pulling ahead and then holding on against Ohio State would have decreased dramatically.

It sounds like he is already gone, meaning Paul Cianciolo will be the backup in the Rose Bowl.  This is a major setback in my opinion.  Yeah, he isn't contributing as a starter, but we have very few options should anything happen to Clark.

He always seemed to have a very good attitude and I'm sorry he felt the need to leave, he will be missed as the probably back up in 2009 and leaves an enormous, Pacific Ocean size hole at the position in 2010.  The coaches had better hope this helps us recruit one of the remaining QBs that will sign this spring, because otherwise it's big trouble.

We of course wish Devlin nothing but the best wherever he ends up.

The school released a statement saying Devlin informed coach Joe Paterno of his intention to transfer.

Officially Official: Donnie Collins passes this along from the PSU Athletic Department:

"Sophomore quarterback Pat Devlin has informed Coach Joe Paterno that he intends to transfer. He will not participate with the team in the Rose Bowl. The Penn State football program wishes him well at his new school."