There Will Be Fallout And Accusation

Share All sharing options for: There Will Be Fallout And Accusation

Perhaps the weirdest part of a high-profile quarterback transfer is the collective need to assess blame.  You know, like, "THIS IS JAY PATERNO'S FAULT."  Or, "DEVLIN LEFT THE TEAM HANGING FOR THE ROSE BOWL."  Okay, fine.  The outrage is useful for a few moments. 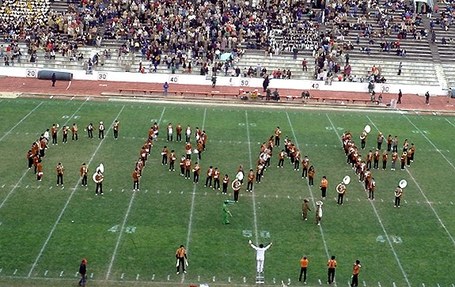 So yes, the story is confirmed, Pat Devlin is gone.  Jeff McLane reached Devlin's high school coach, Mike Matta (who, earlier this year, said Devlin was "not a transfer guy"):

The Lions were trailing, 6-3, but Devlin guided the offense to a go-ahead touchdown and later an additional three points as Penn State won, 13-6, to improve to 9-0. He scored the winning touchdown on a 1-yard run.

"He was riding high," a source close to Devlin said.

But Devlin continued to experience rough patches and doubts over his future, because Clark, a junior, is slated to return next year. The source said Devlin was never comfortable with quarterbacks coach Jay Paterno and relied more on the advice of wide receivers coach and former Penn State quarterback Mike McQueary and offensive coordinator Galen Hall.

"The relationship was never forged with him and his quarterbacks coach," said Mike Matta, Devlin's coach at Downingtown East.

A message left with Jay Paterno was not returned last night.

The same quarterbacks coach, of course, who helped welcome Devlin to Penn State even after the highly-prized recruit had chosen exotic Miami as a college destination, before a coaching shakeup there steered Devlin to his parents' alma mater in State College.

Does any second-team quarterback think he has a great relationship with the quarterbacks coach?

Anyway, the details are juicy:

According to a source close to Paterno, Devlin, along with his parents, Mark and Connie, visited with the 81-year-old coach on Monday to express their displeasure over their son's situation. The Devlins brought with them a list of issues they had about Penn State's handling of their son.

By the end of the meeting, Pat Devlin had informed Paterno that he was leaving, the source said. With one game to play, however, Devlin's decision over whether he would play in the Jan. 1 Rose Bowl against Southern Cal was left dangling.

Yesterday, according to another source close to the team, Paterno asked Devlin if he had reached a verdict. The sophomore said he had not. Paterno made the decision for him, and by the end of the day, Devlin's locker was cleaned out.

Totally fine with the parents getting involved, by the way.  We're talking about Super Coaching Icon Joe Paterno here, a guy with a long history of outsmarting, intimidating, and outlasting his adversaries.  That guy vs. a 20 year old kid, facing the most important decision of his young life.  Devlin's parents were heavily involved in his decision to choose PSU at the last minute, they may as well be involved in this part of the proceedings as well.

Still, I would love to know what was on that "list of issues".  I bet JoePa just loved that.

Paterno did the right thing, by the way.  You can't have a guy on the team who quite obviously has one foot out the door.  Besides, Joe Paterno isn't the kind of guy who takes kindly to being left hanging.  Paul Cianciolo is your backup for the Rose Bowl, and he should be.

This is a situation where everyone did what was best for themselves.  The coaches chose Clark as the starter in August.  Many of us disagreed with the selection, including myself, but Clark proved to be the correct choice for this particular style of offense.  Did Jay Paterno choose Clark because Jay has a bad track record with pro-style quarterbacks?  I mean, maybe.  But his job is to place the proper personnel in position to win college football games, not create a feeder system fo the NFL's needs.  This isn't a football camp.

Devlin did what was best for himself, as well.  Frankly, I'm still surprised that he stuck around after Clark was named the starter in August.  Despite losing the quarterback competition, Devlin was assured a slice of playing time.  Initially, he received it.  He threw 35 passes in the first four games of the season, but never found the field against Illinois or Purdue.  That would be a theme throughout the Big Ten schedule, and he'd never throw more than five passes in a game at Penn State again. 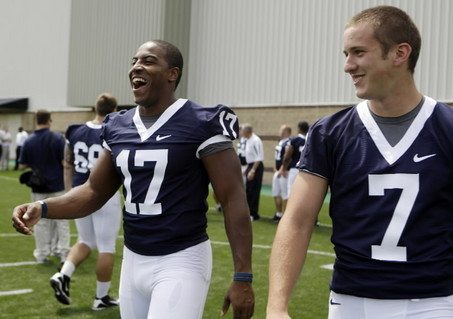 As for initial player reaction, the York Daily Record caught up with hometown guy, Knowledge Timmons:

The news apparently filtered through a team workout on Wednesday, catching at least some by surprise.

"We all came to work out today, and somebody said that Pat might be leaving," said Knowledge Timmons, the William Penn High grad who is a Nittany Lion defensive back. "And I was like, 'What is he leaving for?'

"It's still fresh to everybody. ... I guess (he figured) he's not going to be the starter (next season) so he wants some playing time."

When asked about the timing of the possible transfer, Timmons said, "We're doing good, so it is kind of distracting now. I'm kind of surprised about hearing about it."

Of course, this is just the first or second layer of the onion.  There will be more details in the upcoming days and weeks -- jockeying in the press, stories of how the villainous Paternos conspired to screw Pat Devlin, and all sorts of other fun.  For now, on the field, the important part is keeping Daryll Clark upright for sixty minutes against USC.  Off the field, the coaching staff better be putting every second of their collective spare time into landing an highly-rated quarterback for this current recruiting class.  Cianciolo turns in his equipment after the Rose Bowl.  Clark has one year of eligibility remaining.  After that, there's walk-on Matt McGloin and the intriguing Brett Brackett, who will almost certainly have to shift back to his high school position of quarterback if the coaches strike out on the quarterback recruiting front.  Again.