Nitt Picks Isn't Quite Sure It Would Be That Simple

Share All sharing options for: Nitt Picks Isn't Quite Sure It Would Be That Simple 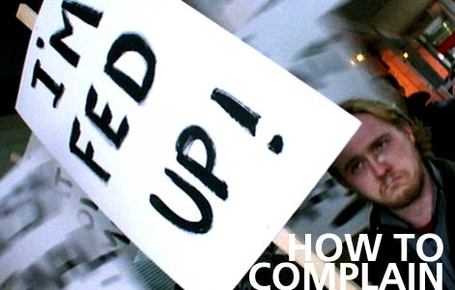 When In Doubt, Legislate.  This is old news, but still stupid news:

[T]here was another one of these anti-BCS things in Congress today, this time in the form of an actual bill, an outraged bill that would force college football into a playoff system. Three guesses which state two of the three Congressman who sponsored the bill are representing

Congress isn't going to fix college football, and between the steroid grandstanding, probes into the NFL, and now re-runs of the above mentioned stunt, I'm not sure what's going on anymore.

What's that Domer?  But some people like the idea.

One way to diffuse the BCS is to take away its ability to directly crown a champion, and this measure seems like an effective way of doing so. Mandating the use of "Mythical" in front of "BCS Championship Game" seems like the best way to embarrass the whole damn institution out of existence.

First of all, incredibly nonsarcastic credit to a Notre Dame fan for hating on a BCS system that they can sleep walk in to.  In regards to the content, though, I don't think that ship floats.

The national championship in college football has always been "mythical", and I'm confident that even sports fan who doesn't frequent the many great blogs of SBN understands this.

The NCAA doesn't even count them in their bragging rights total (yes, that's Penn State T8 all time), and between the Irish and the Tide they can't mathematically; those two schools have awarded themselves something like a combined 249 titles in the last 80 years (estimate).

Everyone knows it's "mythical" and if you made them spell it out on the advertisements it wouldn't change one singe aspect of how the BCS is perceived.

But what about this playoff thing.  Brian at mgoblog refutes the argument that a playoff might damper the regular season:

[W]hen more teams have access to the playoff at the end of the year—the BCS is a playoff—there are more compelling games. This is another reason for a playoff to omit autobids: if Cincinnati had already locked up a spot by winning the Big East their game would have indeed been kind of meaningless. No one should be safe.

Keeping his last sentence true is absolutely the most important thing if/when a playoff happens.  I'm not sure it's practical to think that a playoff, once approved, will actually be able to pull that off, though.

To stray here for a second: the worst thing, by far, about the NFL, is the anti-climatic ending to the regular season.  The final week is virtually meaningless for all but four or five teams as everyone is either in or out.  This leads to situations where, for example: Cleveland needs Tennessee to lose to Indianapolis, but Indianapolis has a spot locked up and will be pulling their starters after the first quarter.  Tennessee is playing for their lives, with their starters, against the Colts third string; Cleveland is helpless.

Certain formats guard against this, but I'm not sure we will ever see those exist. A playoff is likely to mutate out of the current structure and I don't see a situation where the ADs would be ok with giving away guaranteed money. For the record, I'm a playoff fan, but an unconditional move to the "best" possible structure isn't likely; it's important to stop and think about what we are getting ourselves into when we ask the BCS to turn their games into a four or eight team bracket.