Share All sharing options for: The Eternal Good Offense vs. Bad Defense Debate 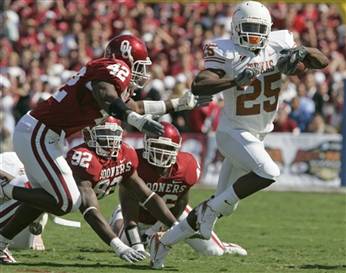 A tackle, huh?  Almost made it.

I think the Heisman is stupid. If someone offered me a Heisman vote I would turn it down because I have more important things to do, like, um, make fun of Big XII defenses.

Dr. Saturday unleashed the type of compilation stat chart you are used to if you've been reading his blog for any length of time. The premise:

[J]ust compare these three quarterbacks to the dozen quarterbacks who have been named "Most Outstanding" since 1988 (plus a couple legendary second-place finishers who could have won it, Vince Young and Peyton Manning). This is easy, since the trophy's been won every year since 2000 by a quarterback whose team is playing for the mythical championship (with the exception of Reggie Bush in 2005, who -- like many of his colleagues -- is lucky the vote came before the bowl game). If you ignore how often they throw (sorry, Andre and Ty) and account for what happens when they do, this is how the trio from 2008 stacks up against best quarterbacks of the past two decades (order is according to pass efficiency rating, with the best number in each category in red):

The chart, which is worth a look, is a list of the most popular quarterbacks since 1988 and, you'll never guess, but when sorted by QB rating the three 2009 candidates fill out the top three spots. Not only that, but they account for the best number in the field for every metric listed (comp%, Yds/Pass, TD%, Int% and, of course, Rating).

There has been a lot of talk about the three dominant Big XII offenses, and on paper they are pretty impressive:

So essentially three of the most statistically productive offenses in the nation. But are they the best three offenses ever? Or are they benefiting from a conference that doesn't play defense? It's impossible to say for sure, but take a look at some other Big XII schools that aren't considered very good when compared to teams from other conferences.

So even if you aren't led by a prolific, Heisman finalist quarterback, if you play in the Big XII you are still probably scoring a lot of points.  Bullets:

Now there is more to be had if you want to go game by game here, looking out OOC play and such, but this was never meant to be that detailed of an analysis. The Big XII won the Media's Favorite Conference race this year, overcoming the heavily favored SEC, on the back of consistent 80 point totals. The Heisman presentation on Saturday night was dominated by talk of records and production, but no one challenged the context.

Texas Tech was able to pull into the national race by playing a Division III OOC schedule and then beating Texas on a very well executed final drive...they won with offense. Maybe, instead of Tech finally getting over the hump (they hadn't been able to get over .500 in league play since 2005) they finally found the right environment: a conference where no one will defend anything so every team with a productive offense can win.

If everyone in the entire conference is scoring loads and loads of points, might there be something else going on here?  The two Big XII representatives in New York this weekend were labeled the two best quarterbacks to play college football in the last 20 years, but does anyone really believe that?   Maybe things are as they appear, but I'd like to see some evidence.

Now, as always, we are going to have to hope that the minuscule sample size of bowl season validates our claims:

So that's two games that could help debunk what I think is offense without context, but two less visible games that are probably a scoreboardman's nightmare. Oh, and in case you were wondering, the Vegas over/unders for the four games (in order of the bullets above): 53.5, 72, 70.5 , and 77. Only two bowl games not listed here have totals over 70.