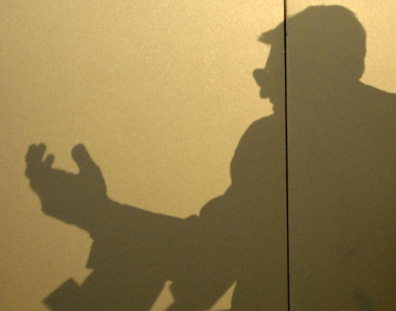 Before we turn our collective attention toward the Rose Bowl, let's quickly examine the aftershocks of the Joe Paterno contract.  First, the official statement from Penn State:

University President Graham Spanier and Athletic Director Tim Curley announced today an agreement that will provide for the opportunity of Coach Joe Paterno leading the football program through the 2011 season. It was also agreed that the parties might re-evaluate their circumstances and alter the arrangement by either shortening or extending its length as necessary.

Of course, this is a carefully scripted and intentionally vague press release.  If it took the Harrisburg Patriot-News years to convince the Pennsylvania courts to compel PSU to disclose the amount of Paterno's salary, you can safely bet that we won't be finding out the intracacies of his new deal.  Unpacking the statement, just for shiggles:

"an agreement that will provide for the opportunity of Coach Joe Paterno leading the football program through the 2011 season."

Obviously, it says that this isn't really an iron-clad, three-year contract in the traditional sense.  Most likely, it's a way of firming up the perception of the coaching situation for recruiting purposes and dampening the media speculation regarding potential succession plans or stories about coaches like Greg Schiano and Al Golden being interested in the PSU job.  Those days, for now, are over.  Press releases are public relations tools, after all.  Given the overwhelmingly favorable national exposure the new contract has generated, Penn State handled it perfectly.  Like it or not, they're pros at this sort of thing.

"the parties might re-evaluate their circumstances and alter the arrangement by either shortening or extending its length as necessary."

Well, sure.  I might re-evaluate my circumstances tomorrow and decide to follow the career path of Fred Sanford (my junkyard, however, will have wi-fi).  The statement is really just a jumbled version of the previous statement:  "Look, he's going to be here a little while longer, and he'll be the one to decide whether it's time to go.  There's no succession plan.  There are no further standoffs, imagined or otherwise, with Graham Spanier.  The Dark Years are over, we have this thing under control now.  Just leave us alone, but please, buy the Rose Bowl DVD and drink Pepsi!"

The other obvious winners?  According to David Jones, Penn State's assistant coaches:

The new 3-year contract for Joe Paterno agreed upon in principle by Penn State president Dr. Graham Spanier is not just a pact for the head coach who turns 82 on Sunday. According to key sources close to the talks, it's also essentially a 3-year deal for his assistants.

The agreement stipulates that, should for any reason Paterno not be able to coach through the duration of the contract, that all of the PSU assistant coaches will be paid through 2011. The aggregate payment for those assistants for that period is in the range of $4 million.

Paterno sought to not only provide security for his assistants in case he either falls into ill health or is removed for some reason but also keep his staff intact. Larry Johnson and Tom Bradley are considered viable candidates for jobs at other schools.

I'd add Ron Vanderlinden to that group, as well.  We're extremely lucky to still have that guy on staff.

The potential losers because of this new deal?  The obvious answer is Greg Schiano, who would appear to be stuck at Rutgers for the next few years.  An exception would be a scenario in which Paterno leaves in the next year or two, and Schiano was brought in to fill the head coaching slot while PSU retained the remainder of the assistants -- if you think Penn State is going to simply buy out the entire coaching staff, only to bring in an entirely new and more costly coaching staff, you're high.

The current non-PSU coach who benefits the most appears to be my main man Al Golden.  He'll have two or three more years to continue his reclaimation project in North Philly, add some more experience to his head coaching resume, maybe win a MAC championship if he's lucky, and have a much more legitimate shot at the job should Paterno hang up his whistle in 2011.  If he's really intent on taking a run at the PSU coaching job someday, he now has a little breathing room in which to operate and turn around Temple within a more reasonable timeframe.

And then there's the curious case of Jay Paterno, who will have three more years to continue improving his own image.  Could he really be positioned to make a play for the Penn State head coaching job when his father leaves?  If there really is a behind the scenes plan to string Tom Bradley along -- which we know has happened before -- and with a number of PSU assistants up there in age, does Jay actually have the inside track for the job in 2011?