Share All sharing options for: On Letting The Big Ten Season Stay Up Past Its Bed Time

What follows is definitely not sanctioned by above labeled authority.

I have a theory I'm not really sure I believe in but made sense to me one Saturday afternoon while talking over the pre-Penn State games with a friend. The theory? That Big Ten teams are built a bit differently than those in other conferences is order to survive in the unpleasant conditions of the late season. Now, for the first half of the schedule Big Ten weather isn't much different than the rest of the country, but what happens when your high flying Texas Techish attack is playing in 25 degree, 30 mph winds? I'm not suggesting that the Big Ten is "slow" or "old" or any of the other crap that comes with that line of conference blather, but it is almost a certainty that, playing in the midwest, you will face a situation where talent advantages are marginalized by mother nature at least once during the season and the winning team will be the one with the bruteness and balance that always seems to prevail on the muddy, wet, cold, windy gridiron. The chances of the Big Ten's leader stumbling to an inferior team in these conditions is higher than it would be in, say, southern California.

Sure, upsets are usually a good time, but an increase in bad weather games is only going to increase their occurrence, thus lowering the conference's chance of sending a team MNC'in. Remember just one loss puts you behind half a dozen other teams that are closer to the front of the line; the negative effects are only multiplied if you lose later in the season (when the bad weather hits).

That being said, I don't really have any data to back this up. Without looking up weather logs and charting teams with more pass heavy attacks... well it's a tall task and not really worth trying to prove anyway.

To get back on track here: I do think that pushing games further and further back into the winter, playing games during December*, is kind of asking for it.

Yes, it's better to be visible, idol teams dropping in the polls for no reason at all is a real thing, but I'm not sure all of our problems are fixed by simply pushing games further back into the year. The problems are just different. While the more popular teams in the league will draw fine in the cold, I don't know how easy it's going to be to get fans in Chicago to attend an already ill-watched Northwestern team. Same goes for Minnesota's new outdoor stadium. 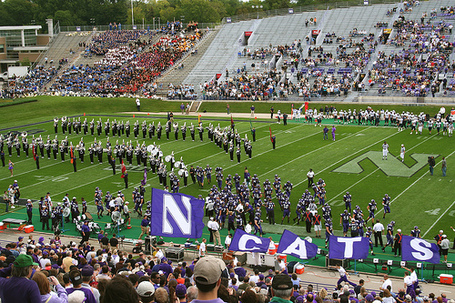 Now cut out the ones in this picture that aren't sticking around for the worst Chicago has to offer.

I'm still interested to see how the Big Ten's scheduling decision, which pushes the last week of league games past Thanksgiving next year, will affect things. It's already a done deal, for better or worse, even with Ohio State and Michigan opposing it (the fact that the change was done in spite of this is, in all seriousness, stunning to me).

Lloyd Carr suggested, when this thing was still up for discussion, that Delaney loby the NCAA to allow the Big Ten to start a week early instead. While this is clearly an attempt at protecting the season ending game with Ohio State from becoming an annual Ice Bowl, I prefer that idea as well. The offseason is too long anyway. On the other hand, one might conclude that it's all an effort to replace the Land Grant Trophy with its much more awesome bearded version (for warmth, of course), in which case, I'm all of the sudden fine with it.

Because public polls always lead to a situation where everyone wins, let's hear what you think in the poll below.

*Note that this isn't actually possible right now. The new rule allows games to be played the first weekend after Thanksgiving but not any later. I looked up (yes, I actually looked this up) and it turns out Thanksgiving will never be any later then it was this year, meaning Big Ten football in December is allowed only via mediocre bowl games.