The first of many looks back at the pleasant (and unpleasant) surprises of Penn State's 2008 season.  Today, Mark Rubin.  Tomorrow, your mom! 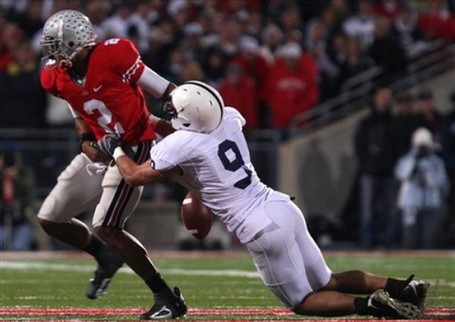 "They are who we thought they were!"  Words from one of the top five coaching meltdowns in history?  Yes, but it's also how many described the early play of Mark Rubin and Josh Hull, two players who in August were pegged as the biggest potential liabilities on the Nittany Lion defense.  As noted (repeatedly, yes) in my post-game defensive grades, Hull had his ups and downs throughout the year.  Let's give Hull credit for a few things -- he's a walk-on who was pressed into action when Sean Lee went down in the spring, he's an Academic All-American, and he's an absolute credit to the program as a whole.  All of that is completely true.  On the field, when he was good, he was very good.  When he was bad, he was very not good.

Mark Rubin also struggled to start the year, mainly in pass coverage.  As the year progressed, however, Rubin truly grew into the position and made it his own.  When the Lions rolled into Columbus, many analysts focused on Rubin as the soft spot in the Penn State defense.  Then, this:

And Mark Rubin will never have to pay for a drink in State College again.  He finished the season in strong fashion, quickly evolving into a sure tackler -- even in the open field.  The skinny wide receiver who attempted to save the Nittany Lion passing [sic] offense [sic] in 2004 turned in the biggest defensive play in Penn State's 2008 Rose Bowl run.  The guy who beat Michael Phelps in the pool as a kid let loose with one last freestyle stroke against Terrelle Pryor, catapulting the Lions into the BCS.