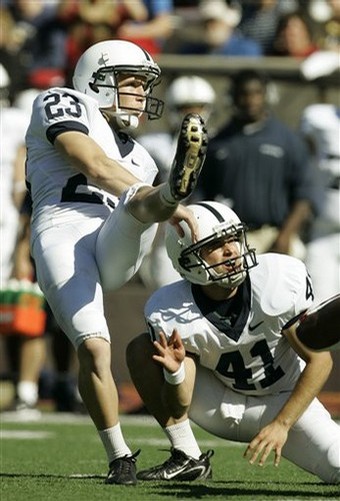 Kelly had an excellent year, hitting 19 of 23 field goal attempts and all 57 of his extra points for a total of 114 points.  Coming into this season, he was often criticized for his inaccuracy outside of 40 yards, and while all four of his misses came from long distance (60, 45, 45, 40), he was greatly improved in this department.  His list of accomplishments, with one game remaining in his Nittany Lion career:

And let's not forget Kelly's non-kicking contributions.  He scored a two-point conversion on a botched extra point at Michigan in 2005*, and a touchdown on a fake field goal last year at Michigan State.

Next year, Penn State will likely have to start over with another freshman kicker, Anthony Fera.  If he can even come close to matching Kelly's four-year performance, we'll all be thankful.

* - At which point, I turned to the other Penn Staters watching in a Denver, Colorado bar and said, "there's no f'ing way we lose this game now, right?"