Fear Not That They Fail, Laugh Instead

Share All sharing options for: Fear Not That They Fail, Laugh Instead 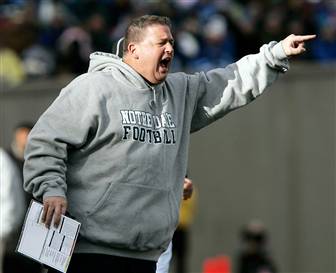 You can't spell "mediocre" without d-o-m-e-r.

Tonight Notre Dame will try to break their nine game bowl losing streak in Hawaii. It is college football's longest streak, made even funnier by the fact that it has actually been fifteen years since they last won in the post season. So let's enjoy it, root for the Rainbow Warriors and hope Weis shows up in a mumu. This is a meaningless game, totally unconnected to Penn State; schadenfreude at its best.


I cringe a bit as I type this, but the Big Ten should want Weis to succeed in 2009. The Big Ten needs Notre Dame to be good again, if for no other reason than to boost its nonconference strength of schedule. Three Big Ten teams play the Irish every year -- Michigan, Michigan State and Purdue -- and Notre Dame should present the opportunity for a quality victory. Michigan State's win against Notre Dame on Sept. 20 has lost a lot of value since the Irish sputtered down the stretch.

Of course it can't be just a game, everything that happens in the universe has to somehow be introduced as evidence in the Great Conference Debate.

While I like where Rittenbug's head is at, and he's a fine writer and does good work, I have to completely disagree.

A good example: Nebraska hasn't been relevant since 2002, and still the Big XII is considered the most talented conference this season anyway. The Big East was completely ransacked, losing the only two teams that had ever received an auto-BCS bid, yet WVU and USF were both highly ranked last year and were both given enough support from the public to control their own path to the MNC game (both failed, of course).

College football is a powerful being and when a marque team stumbles there are 118 other teams ready to fill the void.

Bringing this a little closer to the specific situation: Notre Dame only hurts the Big Ten.

So relax Penn State readers, root for Notre Dame to fail and fear not the consequences.  A Notre Dame loss... 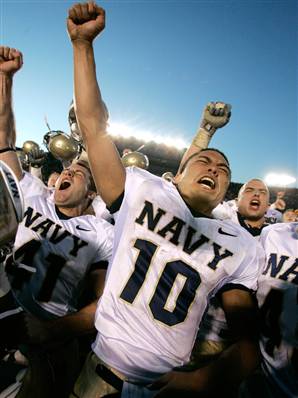 Is a win for America.

(photos from thermocaster and MSNBC)