Nitt Picks Will Not Be Drafted In The First Round

Share All sharing options for: Nitt Picks Will Not Be Drafted In The First Round

All kinds of good stuff floating around The Internets today, so let's flag a few stories for the people who are stuck at work (hi!) on the Friday after Christmas.

It's been a successful year for the Nittany Lions on the field, but a very quiet year for them elsewhere:

Despite those hurdles, Bowman took over at one starting linebacker spot four games into this season and has remained there.

"I've matured a lot," he said. "I notice a lot of things that I don't do now. I appreciate my family just always being there for me. Just Joe (Paterno) and the Penn State family also just helping me out and leading me on the right path."

Paterno has noticed the growth of Bowman, on and off the field.

"He's become very solid," Paterno said. "And when he lost his dad, I think that was a shock to him and kind of made him think twice about his obligation to his family and some things."

Other Penn State defenders who have benefited from second chances are end Maurice Evans and tackle Abe Koroma. The pair still faces misdemeanor marijuana possession charges from a Sept. 2 incident at their apartment. Each sat out three games, returned for the Illinois game, and contributed to a highly-rated defense.

Evans, a junior who before this season had been promoted for All-America honors based on his 12.5 sacks from last season, started the opener but has been a backup since, registering 31 tackles and 4.5 sacks.

"I tried to come back and be a force like I was before," Evans said. "Things didn't work out that way, but I'm happy with the progress now from the beginning of the season."

Koroma, a redshirt sophomore, also was a first-game starter but has been a backup since. He finished the regular season with 24 tackles and 1.5 sacks. 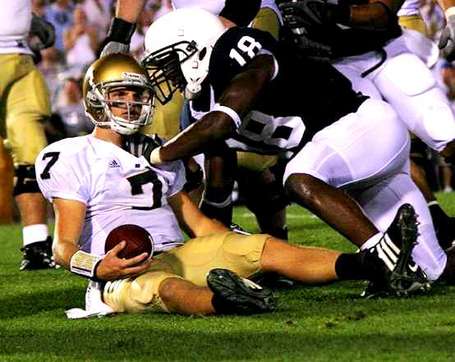 It would be a bit foolish to say that the 11-1 record is directly due to the improved citizenry of the Penn State players, but it certainly could not have hurt.  And hey, we know Maurice Evans will be back, right?  As for Aaron Maybin, well...

When you go from having 12 tackles - total - in 2007 to 12 sacks, 19 tackles for losses and three forced fumbles the following season, maybe the worst thing you can do is wonder why and how it all happened.

"I don't know. I try not to think about it," the serendipitous Maybin said when asked about his dizzying ascent from a possible rotation-type guy on Penn State's defensive line to its most acclaimed star. "In any case, that's really not something I can control now. Things happen for a reason."

As is the case with run-stuffing junior defensive tackle Jared Odrick, Maybin, a 6-4, 247-pounder from Ellicott City, Md., is contemplating an early jump to the NFL. Each has filed paperwork with the league to assess his draft prospects, although Maybin said his only focus for now is on fifth-ranked Southern California (11-1), which takes on No. 6 Penn State (11-1) in the Rose Bowl on New Year's Day.

"I'm really not concerned about it," Maybin said of the NFL evaluation of his potential for going high in the draft, should he choose to come out. "I probably won't get the report until after the Rose Bowl, anyway."

Okay, nothing set in stone there.  I think we all agree that Maybin would be foolish to come back if he was truly projected as a top ten pick.  Whether he would actually be drafted that soon is still open for debate.

ESPN.com recently ran a nationwide poll about who would win the Rose Bowl.  You likely know the results by now -- 49 48 states picked USC.  The Penn State players were bemused:

"I'm glad we got one state," [A.Q.] Shipley said. "It's obviously disappointing that 49 other states don't think we've got a shot."

Defensive end Josh Gaines, watching on the Penn State campus, ordinarily doesn't worry about such things. He made an exception this time.

"I immediately jumped up," he said. "I got a little excited."

Then he called teammate Jared Odrick.

"I was actually writing a paper, and I didn't see it," Odrick said. "I think it kind of caught me off-guard during the conversation. I was eight pages deep in a paper."

"We've developed a black eye for the past couple years," Shipley said. "I was talking to James Laurinaitis from Ohio State, and if we win both of our games, [The Big Ten conference is] back on the map. It's going to be a challenge, but we both think we can do it." 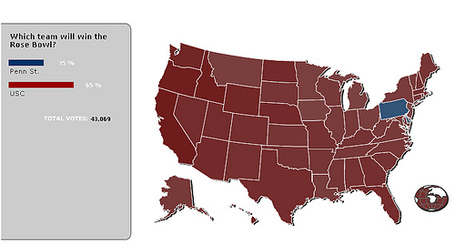 I'm sure we'll get into recruiting once the Rose Bowl is in the books, but the Pocono Record has a nice rundown (they're highly underrated for PSU coverage, in my opinion), including news of a possible second quarterback, the ongoing saga of five-star LB Jelani Jenkins, and wide receiver Justin Brown of Delaware.

Finally, we know that athletes from every bowl-eligible team receive an armful of goodies.  The Rose Bowl swag:

The Rose Bowl ranked among the middle of the pack, giving each player a Sony DVD camcorder, a Fossil watch, an Ogio backpack, a New Era 59Fifty fitted cap, a plaque, an autographed football and a one-year subscription to ESPN the Magazine.

Not too bad.  Who autographs the football, anyway?

Elsewhere:  USC Offensive Coordinator Steve Sarkisian says Aaron Maybin is "the best [pass] rusher we've ever seen."  Joe Paterno still isn't sure whether he'll coach from the sideline or the press box.  David Jones takes a fun look at the first USC-Penn State Rose Bowl in 1922.  The apparent star of the Rose Bowl Parade?  A 49-foot tall robot from Japan.  Oh, and miniature donkeys from Indiana.  Both terrifying in their own ways.