When We Last Left Our Friends, The Icers...

Share All sharing options for: When We Last Left Our Friends, The Icers... 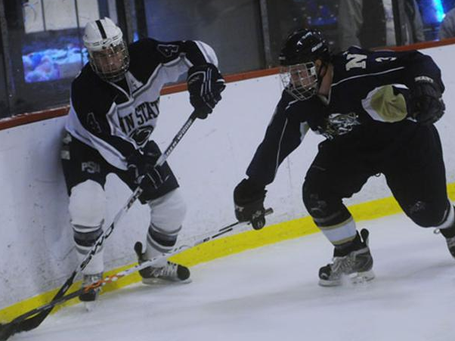 [And we're back! Icer guru Icerguy was kind enough to give us a first half update on the Icers. I've added a couple of blurbs when I thought they might be helpful,  bracketed and italicized like muah. --Kevin HD]

What happened: The first half of the 2008-09 ACHA season is over and the Icers are where they began the season - ranked #3 in the ACHA rankings.  And it seems that the ranking has been the only consistency this season.

After a couple of hard-fought games against Delaware to open the season, the Icers pushed their way through their ACHA Showcase opponents in Adrian College and Robert Morris. Unfortunately, the third game of the Showcase saw an ugly loss to Michigan-Dearborn - a UM-D team that had lost the previous day to Penn State Berks.

The Icers then jumped on a 5 game winning streak with a win over Pitt [good wrap-up of Pitt here.  -ed], and then sweeps over Navy and rival Ohio. But a dominating performance against Drexel still resulted in a 3-2 loss. The Icers would split that weekend, take the season series against Navy, and then split at Rhode Island in a weekend we could have just as easily lost both games.

December started with a split against West Chester. Calling this a tough set of games for both teams would be an understatement, as Friday's game saw 2 fights and 92 minutes of penalties - 76 in the 3rd period alone. After that wild weekend, the Icers closed the fall semester with an easy 7-1 win over Niagara. 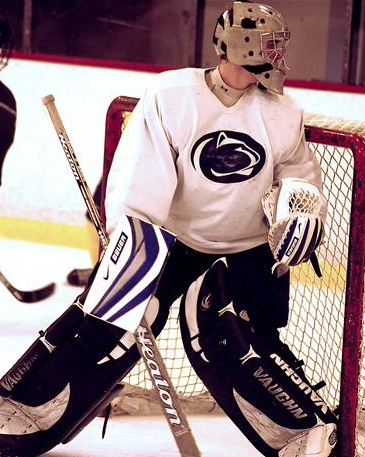 Goaltending has been back and forth this season. Just when it seems as though one of the goaltenders would start to run away with the #1 spot, a weak game with some bad goals returns us to the carousel. Teddy Hume has the better numbers (7-1-0, 0.900 save pct., 2.56 GAA), but Nick Signet has the experience (5-3-0, 0.895 sv%, 3.24 GAA). It's rare to see Signet let up as many soft goals as he has, but a refocusing as the tournaments will likely see him as the #1 at the right time.

The Icers have also had a few injuries shake up the lineups. Taylor Cera is finally back to full strength after taking a knee-to-knee collision early in the season. Still struggling with injuries are senior defenseman Scott Dakan, junior forward Dave Herel, and senior forward and captain Frank Berry. (Personal note - nothing is more depressing than seeing Berry not on the ice for a game.) Once back, these three should easily solidify some of the holes in the current lineup.

And kudos to Matt Kirstein (F, Jr.) - after his first two seasons saw only 17 games, 3 assists, and no goals, Matt has been on fire as a starter this season. His line in the 19 games this season - 8 goals, 15 assists, 22 PIMs. Out of nowhere doesn't begin to describe his addition to the starting lineup.

What it means: All things considered, the Icers have themselves in a better position than they should be right now. The inconsistencies could have had them ranked a lot lower, or looking up at either Delaware or Rhode Island in the ESCHL standings. They've shown an ability to come back against a good team (scored three goals in the final 9 minutes against URI to win 3-2 at URI). They've also shown the ability to dominate and lose (outshot Drexel 66-20, only to lose 3-2). At this point, it's a matter of putting it all together - goaltending, creating scoring chances, and getting/staying healthy. A tough semester lies ahead, but it might be what they need to be ready for Nationals.

What's on the horizon: Coming up this weekend are two of the biggest non-ACHA games Penn State has played in a very long time. The Icers were invited to the Salem State Hockey Classic, which will give us a chance to see how the program stacks up against some of the NCAA DIII teams. The link also notes a video webcast will be available - I know nothing of this right now, but will try to update with more linkie goodness when all is determined.

[This was sent in by Icerguy earlier in the week, the tournament wrapped up just today.  The team suffered a tough loss to Salem St., giving up the deciding goal with less then five minutes to play and the Icers on the power-play.  They rebound strong the next night against Salve Regina, also an NCAA D3 team, winning 8-0. --ed]

After that are the road games against rival Ohio, January 9-10. The Bobcats aren't as strong as they were in years past, but nobody will ever overlook a rival in their home arena.