The Penn State Icers: Doing What They Do Since 1971

Share All sharing options for: The Penn State Icers: Doing What They Do Since 1971 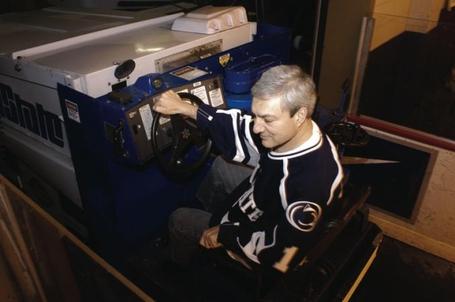 This is your introduction, become familiar with the material because we aren't going to waste any more time with background knowledge.

Let's get you caught up. The Penn State Icers are the premiere club non-scholarship team at the university (there are others).  They play in the American Collegiate Hockey Association (ACHA).  The ACHA is considered the top club level in the nation and runs as a non-scholarship, self funded league.

This is not your roommate's club non-scholarship team.  Instead of showing up a couple times a week for a lazy scrimmage, players are recruited and held to fully coached, fully mandatory practices.  Don't believe me?  From NHL.com:

"Club is a four-letter word in our vocabulary," says Al Murdoch, the long-time coach at Iowa State University, a top program in the ACHA.

Those with an understanding of the U.S. college hockey scene consider the top ACHA clubs -- those playing at the Division I level -- to be the equal of NCAA Division III schools.

Penn State was a charter member of the league and is consistently one of the elite teams.  They won the inaugural championship in 1991-92 and have played in the championship game 13 times, winning six.  This includes an eight year stretch that came to an end last season; Penn State won four titles in a row from 2000 through 2003 and then finished runner-up from 2004 through 2007.

The league has become very competitive and Penn State has developed natural rivals.  Ohio University has probably become the most fierce; the Bobcats have won four titles since 1992 and played Penn State in the championship back to back years (2002-03 and 2003-04).  Illinois has also been consistently competitive.

Penn State often sells out the Greenberg Penn State Ice Pavilion, a short walk to the eastern part of campus and just a stone's throw from where this happened (this also).  Games are typically played in sets of two, the opener Friday night and the closer Saturday afternoon.

What you've missed so far.  The team is currently ranked third nationally behind Illinois and Lindenwood.

The team has played four single games, going 3-1 including a 10-3 win over Pitt. The Pitt Panthers, it was embarrassing. For Pitt I mean.

Up Next.  Home game, Friday, 9pm.  Penn State has another home/away match-up with in-state West Chester.  The Rams are 10-5 and currently sit in the eight spot in the rankings.  Penn State needs to overcome their recent loss to #11 Rhode Island if they want to maintain their three ranking.  Taylor Cera, who started the season as a first line forward before being injured, is back at "100 percent" after missing the RI series.