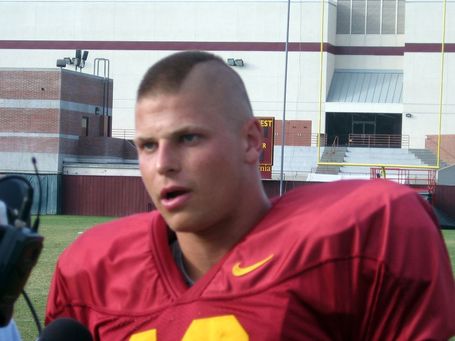 "It’s more aerodynamic, plus it keeps me in line for field goals." -David Buehler

Let's be straight for a minute: kickers are kind of out of place in football.  They are obviously important, but with the death of two-way players and increased specialization, someone who kicks a non-moving ball doesn't even have to be a decent athlete anymore.  Or even sober. 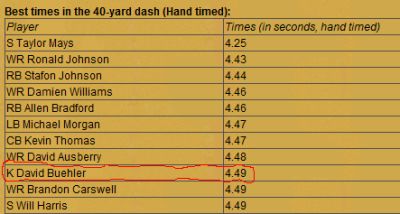 Of course, being a great athlete doesn't make you a great kicker, either. Considering he is often in favorable weather conditions and the best recruiting juggernaut UCS has to offer, well, his stats are a little underwhelming.

He didn't even attempt kicks in five of USC's 12 games, and only once hit more than one kick through the uprights in non-extra point situations.  He ranks dead last in the Pac-10 in FG attempted and, naturally, FG made.

Now a lot of this is on his team, a kicker can only kick when presented the opportunity, but Carroll hasn't sent Buehler out to kick a 50+ yarder all season, suggesting he lacks some confidence in this particular special teams unit (although to be fair, this is for some reason a common trend in the conference).  This is reinforced by Buehler's long on the season: just 43 yards.  This ranks him 9th in the conference, 96th nationally.

So what does it mean?  We'll it's hard to tell based on the sample size, but I'm confident in saying Buehler is no Kevin Kelly, something to consider if this game turns into the low scoring struggle the stats suggest it might.