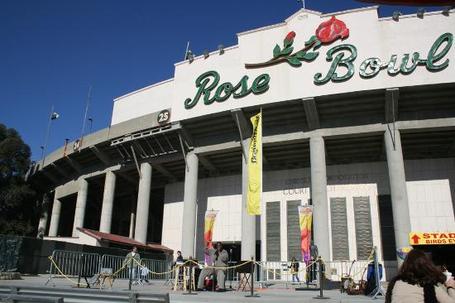 The time for garbage stories from the LA Times are over.  The game in finally upon us and, as is the BSD custom, we offer up our expectations.

In the lead up to this game nobody gave Penn State a chance. Their reasoning is three fold. A) The Big Ten sucks B) USC owns the Big Ten in the Rose Bowl and C) USC's defense is the OMG GRATEST DFENSE EVAR!!!
A and B obviously have no bearing on this game. Penn State is not going to lose this game because Ohio State laid an egg in the last two National Championship games unless we trot out Troy Smith and Ted Ginn and start James Laurinaitis at middle linebacker. And because the Buckeyes were busy off getting destroyed in the National Championship game, USC hasn't even been playing the Big Ten champions in the Rose Bowl the last two years. So again, their wins over Michigan and Illinois don't really mean much of anything in this game.
When I compare these two teams this season they really match up pretty well. Yes, USC has a great defense, but they can be scored upon. Stanford scored 23 points. Oregon State, a team we held to 14, scored 27 on the Trojans. So it can be done, and I would put our offense up against anyone's in the country this year. I'm not saying we're going to hang 50 points on the board, but scoring in the 17-24 range sounds pretty reasonable.
What people are overlooking in this game is how well Penn State's defense matches up against USC's offense. Penn State doesn't have the gaudy rankings like USC has, but take away a late touchdown in a blowout against Oregon State here, a bad first quarter against Michigan there, the 11 points a bitter Mark Dantonio ran up on our third team defense in the closing minutes of the Michigan State game and our numbers look just as good. Meanwhile, USC's offense has struggled at times and while it is loaded with Heisman type talent, Pete Carroll hasn't been successful in getting them to play as a cohesive unit.
So at the end of the day this game is going to come down to turnovers, penalties, special teams, and intangibles. In the first three areas Penn State excels while USC is just average. Advantage Penn State. As far as intangibles, Penn State has everything going in their favor. USC players have openly saying they don't want to play in this game. They would rather be playing for the National Championship or the Fiesta Bowl against Texas. I scoured the USC blogs and newspapers looking for their perspective on the Rose Bowl the past few weeks and mostly I found a lot of talk about coaching changes and the NFL draft. USC has been dealing with a lot of distractions. But Penn State is a team feeling disrespected and really hungry to prove they deserve to be mentioned along with the best teams in the country. And Joe Paterno is the best when it comes to preparing for bowl games. Advantage Penn State.
This game is going to be really close. I think the defenses will hold both offenses in check and this is going to be a low scoring game. It's going to come down to a late penalty or turnover to decide the winner. It's too close to call in my mind, so I'll go with the good guys. And the score will remind us about the last big bowl game we played against a top five opponent.

Does this matchup ultimately come down to a battle of motivation versus talent?  Nobody can question which team has the better athletes, but how seriously has USC taken its preparation for the game?  A look at USC's biggest wins shows that they beat a Beanie-less Ohio State team that was done in by its own mistakes, lost to Oregon State two weeks after the Beavers were destroyed by PSU, squeaked by mediocre Arizona, struggled at home against a decent Cal squad, and didn't really impress against UCLA.  Perhaps it could be chalked up to USC's occasional ability to play down to its competition, but if you're a Penn State fan or player, the Trojans shouldn't scare you.
Penn State absolutely must be able to run the ball directly at USC.  We're not a big east-west team to begin with, but if you recall the USC-Oregon State game, the Beavers took their speedy little running back and repeatedly sent him up the gut with great success.  Could Stephfon Green turn out to be the surprise star for the Lions?  If USC stuffs the Penn State running game, that means more dropback passes for Daryll Clark, and that means all sorts of blitzes from the Trojan defense.  If we can't keep USC honest on defense, we're positively screwed.
Penalties could be a huge factor in the game -- USC racks up penalty yardage like it's their job, while Penn State is one of the least-penalized teams in the nation.  I don't expect either team to score in the high 20's without a defensive or special teams touchdown.  It'll be close for a while, but I can't help thinking that USC's overall athleticism wins it for them on a few key plays in the fourth quarter.   We'll be in the game, perhaps until the end, but the valiant effort is likely to fall short.
Southern California 24, Penn State 20
Kevin says...
I really like this game because I think it allows Penn State to play their game and win.   There aren't any major adjustments or things they haven't seen before.  Yes, USC is the most talented team Paterno has faced, but reports of their divinity are largely exaggerated.
The thing that I think will be the most interesting is how Clark handles the pressure the USC defense is sure to apply.  Things never seemed to reach consistent during the Iowa game in large part because the offensive line wasn't playing like themselves (further complicated by frigid weather and high winds, something that probably won't be a problem tomorrow).  The line needs to give him time.  Also, and this is important, Clark absolutely cannot be afraid to run the ball.  He seemed to really dislike doing this during the season, wanting to prove he can throw, but he has to take what is given to him.  Similarly, I worry that the coaches will be afraid to run him because injury=catastrophe.
So the best case scenario is an game similar to the one we played against Ohio State.  Solid special teams (no missed kicks this time, of course), no turnovers, and eliminating the big play.  These games are nerve wracking and often very frustrating to watch, but I like the strategy here.
This game means a lot to the seniors and there is no way a negative outcome will have anything to do with a lack of effort.  Paterno has shown, even when forced off his feet, very good at preparing for bowl games.  Based on some of the previews we've run here, I'm not convinced USC has any decisive edge in talent.  Their defense is probably a little stronger, but I think the other side of the ball is advantage Penn State.  I think the determination and focus will be the difference.