How Good Is The Best Defense Of All Time, Really? [And Penn State's Too]

Share All sharing options for: How Good Is The Best Defense Of All Time, Really? [And Penn State's Too]

It is very much unlike ESPN to exaggerate or talk in absolutes, so I was especially taken back when they starting discussing the 2008 USC team as possibly one of the best defensive teams of all time. 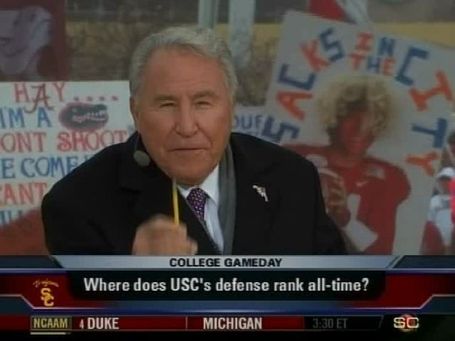 And so I was obviously compelled to pull the numbers.  As always, we stress context, context, context.  Here are USC's opponents, their scoring and total offense rank nationally (out of 119 teams) and how each performed against TBDOAT:

And Penn State, who is no slouch on defense either:

[Remember that Penn State didn't play Minnesota (82/91) or Northwestern (74/62).  Also, I was forced to exclude Coastal Carolina as they really can't be compared to D1a programs and don't have a D1a rank.]

So who's defense is the best of all time evah?  I hate even asking that questing because it doesn't make any sense and can't be determined anyway, but based on the level of competition each played (offensively, I mean), I think it is safe to say that neither one is completely out of this world.  Both have performed very well, but both have also faced a relatively weak slate; an average around 65 is nothing to print billboards about.  Each has also had a couple of breakdowns.

So who's defense is better?  We had to go here, didn't we?  Well, again, it impossible to say for sure, but there is this to consider:

USC's scoring and total averages are better, and the level of competition is somewhat similar.  However, I quickly went back through the box scores and came up with this non-scientific stat: each team has blown out a lot of their opponents and weren't playing their first team defenses the entire game.  I estimate (and am relatively confident in these numbers) that USC has given up 9 garbage points, Penn State 21.  That brings the average numbers a little closer together.

Again, I don't think there is anything here that you can use to distinguish these teams.

So what does it all mean?  Well, I think the game hinges on which offense is able to keep themselves together.  As is usually the case when two great defenses face off: turnovers are a very important stat.  It's going to be difficult to overcome a negative turnover margin when you probably aren't going to be given very many chances.