Undercover Of The Night: Sparty Pre-Game

Share All sharing options for: Undercover Of The Night: Sparty Pre-Game

Through a series of strange, fortunate events having nothing to do with my participation here at BSD, I received a pre-game field pass for the Michigan State game.  This included access to the recruiting lounge and permission to mull about on the sideline during warmups.

The recruiting lounge isn't really as swanky as it sounds.  There's a buffet, a bunch of cafeteria style round tables, and a few TV's mounted on the walls.  The location is key, however -- the windows face the south, paved RV lots, so recruits are able to watch the traditional blue school buses approach the stadium, then witness the overzealous hero worship as the team files into the locker room area.  The kids were universally impressed by the display.

Another interesting part of the lounge is that many of the assistant coaches make a quick appearance to essentially shake hands and kiss babies.  Tom Bradley, Larry Johnson, Sr., Bill Kenney, and a few others were all walking around and saying hello to the recruits.  After introducing himself to a few high school guys, Dick Anderson took a look at my table, quickly surmised that I was not (a) in high school or (b) an athlete, and moved on with a quick smile.

After 20-30 minutes, it was time to head downstairs. 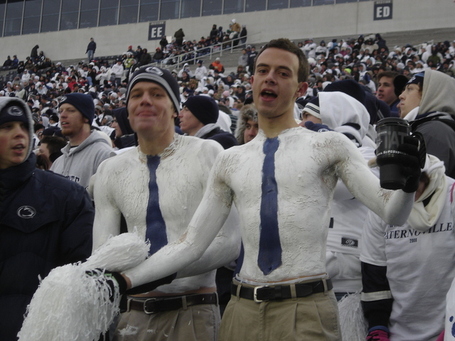 You'll remember these guys from the broadcast.  When I rewatched the game, I believe the announcers mentioned in the first quarter how the guy on the left was already having regrets.  As you can see, he realized how bad this idea was much earlier than that.

Loads of pictures and videos after the jump.

Sad to say that most of my player pictures didn't come out, presumably due to the ridiculous stadium lighting and the falling snow.  However, just as the heavy snow began to fall during pre-game, I was able to snap off a few nice shots of the Blue Band. 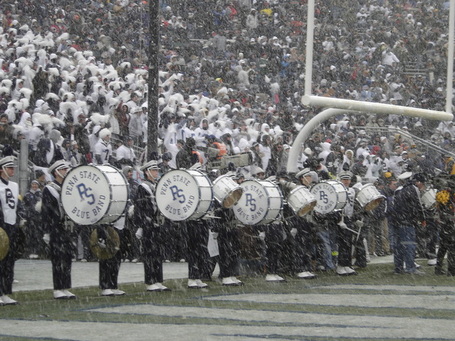 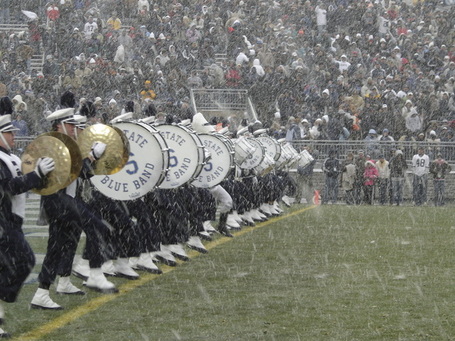 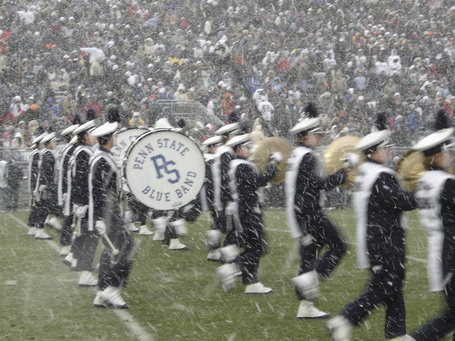