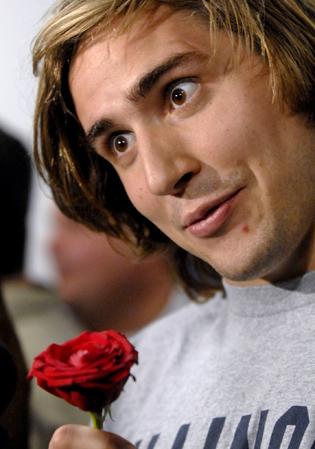 We are joined this week by the excellent blogger/photoshop extraordinaire Illinois Loyalty, who describes themselves as being "devoted to the glory and heartbreak that is Illini sports".  (Heartbreak indeed!)  As usual, BSD questions are in bold.

Are there any significant injuries or suspensions from players getting high after beating up a Div I-AA opponent? Or was that just us?

I was half expecting a few suspensions due to "internal issues" after the LA-Lafayette game myself.

Anyway onto the injury front, the Illini lost DE Sirod Williams at preseason camp and CB Miami Thomas during the EIU game both due to ACL injuries. The Illini have some depth at d-line which should minimize the loss of Williams, the loss of Thomas hurts as UI has some issues at secondary. On the o-line, redshirt freshman Jeff Allen replaced starter Ryan Palmer (foot injury) at right tackle in the 2nd half of the Louisiana game, and Allen is expected to stay in the lineup for Saturday's contest.

Returning to the field are S Donsay Hardeman seeing his first action of the season, and receiver Jeff Cumberland (foot) and DT Josh Brent (mystery illness) made season debuts in the Louisiana game.

Much has been made of the loss in the backfield. With no Mendenhall to eat up yards and clock, can Juice Williams carry the running game all by himself this year?

You can't totally replace a guy like Mendenhall, however the running game will not fall on Juice's shoulders alone as Daniel Dufrene has emerged as the go-to back. Dufrene is averaging 100 yd/game and 6.7 yd/carry.

How will Illinois fill the Patriotism Gap left by the departure of J Leman, his mullet, and his American flag necktie?

J may be gone from the field of play, but his omnipresent spirit will continue to watch over the Illini.

Replacing Leman on the field, Brit Miller has improved at middle linebacker and leads the Big Ten in tackles per game.

David Jones writes in The Patriot-News that Temple may have found a weakness in the PSU offensive line and that Illinois is fit to exploit it. Do you think Zook has the talent and depth of the defensive line to pull this off all game, or is Jones reaching a bit?

Ron Zook has said from day 1 at preseason camp that the d-line is the strength of this Illini team. Have they shown it yet? No. The gears are grinding and starting to lock, but they're relying on too much inexperience to count on any sort of full-game consistency just yet.

So what do you think is the best way to attack the Illinois defense?

Attack the safeties with Penn State's stellar receiving core. And repeat. We're all excited that Donsay Hardeman is finally going to get some playing time, but he has zero experience, and the rest of the crew has had some serious issues with being in the right place at the right time. That, and tackling.

The prime time atmosphere in Happy Valley has received a lot of attention in the past. Are you worried about this team's ability to perform in a hostile environment? Or are you falling back on Illinois big road win in Columbus last year?

This is new territory for the Illini, going into a big prime time matchup on the road against a very good opponent charged up to take them down. If Illinois pulls out the win I would consider it a bigger victory than last year's triumph at #1 Ohio St.
Facing the Buckeyes, the Illini were playing their best ball of the season. And it didn't hurt that Ohio St had just faced Penn St, Wisconsin, and had Michigan to look forward to the following week.

As of now, Illinois has a lot of work to do defensively, and the offense has slipped since a huge output against Missouri in Week 1. Meanwhile, Penn State is playing great on both sides of the ball, and is very well rested.

Zook is very good at getting his team ready in conference play when no one is giving them a chance. And the Illini will come out and compete, but Saturday all signs point toward Penn State.  My prediction: Penn St 38 Illinois 31

Thanks again to Illinois Loyalty and make sure to check out the enemy before the prime time kickoff tomorrow night.