It turns out God does answer prayer. Unless you are from Michigan. Then he gives you a small penis, a blog, a crappy defensive coordinator, and laughs in your face.

Two reliable sources are reporting that Greg Robinson is indeed the guy at defensive coordinator; unless there's an unexpected derailment an official confirmation should come sometime soon.

I've said my piece on Robinson already—in a word: yikes—and am pretty skeptical of the hire. However, I am not a football coach or even that familiar with Robinson's work except in a macro "holy God what happened to Syracuse?" sense. Rich Rodriguez is, and he's basically gambled his career on his future performance. All hail Gamblor!

After searching for a month this was the best guy Rich Rodriguez could come up with? Yeah ok he won two Super Bowls with the Broncos a decade ago. He also had John Elway and Terrell Davis on his team. Since then he puttered around before landing in Syracuse where he completely leveled the Orange to a 10-37 record in four years. In his entire tenure the guy won three conference games in the Big East. THREE! In a league of creampuffs, they were the creamiest.

This is the man you choose to lead your defense. Good luck with that, Michigan. I hate to say it, but I told you Rich Rodriguez was going to be a disaster. Let's review.

He's pissed off prominent alumni. He's run off his star players. 2009 was a failure of historic proportions for the Maize and Blue. He let his defensive coordinator take the fall for the dismal 3-9 season, even though we all know it was the offense that sucked. To date they've had eight kids decommit from their verbal agreements and there are possibly more on the way.

I know some Michigan fans are still keeping the faith. They still believe that Rich Rodriguez is the man to turn around their program and restore them at the top. But as an objective observer looking in from the outside, I see just one thing. 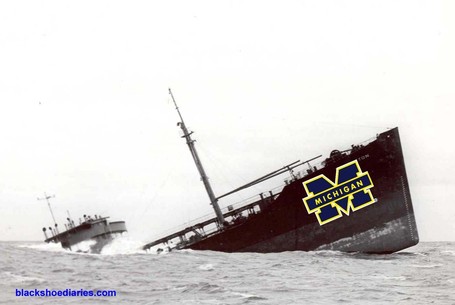