The Kids Are Alright: Part One

Share All sharing options for: The Kids Are Alright: Part One

Recruiting.  It's a creepy cottage industry built on harassing phone calls to teenage boys about decisions which, unfortunately, substantially alter the future landscape of our favorite college football program.  For better or worse, it's important stuff.  Here's the first of many looks at Penn State's incoming freshman class.

Yes, in case you couldn't tell, I'm not a fan of the recruiting business.  It makes media stars out of high school kids, and enables some truly creepy people to attain prominence, wealth, and influence by essentially pimping and parading 17 and 18 year old boys.  Recruiting?  Awesomely important.  The modern recruiting process?  Ehhh, for my own personal sanity, I'll pass.  This is why you don't see many BSD posts about a kid cutting his list of schools to 30, or what a certain player thought about the Chicken Cosmo during his official visit.  Not our thing.

Still, it's late January and with National Letter of Intent Signing Day looming, let's take a look at the players who plan to become Nittany Lions, in the order they committed. 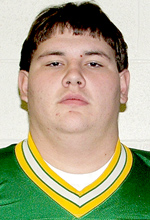 Rated the #9 center by Rivals and #11 by Scout. Immediately prompted "The Sky Is Falling!" style comments when it was revealed that Howle's only other offers were from East Carolina and Navy, which completely overlooked the possibility that Penn State found the kid before other major programs did. Coach's son, with a lofty high school GPA.  Was honored at an all-star game for his community work; however, looks like a guy who spends his afternoon leisurely stuffing freshmen into lockers.  Described in practically every media account as having a prominent mean streak on the field.  This premium video from Scout confirms it -- he was throwing dudes all over the place at the N.C. vs. S.C. Shrine Bowl.

Scouts Inc. says: "He is a formidable base blocker who comes out of his stance determined to knock tackles and nose guards into the secondary. Churns his feet and maintains a low center of gravity. He isn't satisfied until the defender is driven well out of the play or knocked on his back. ... Will fit best in a program that emphasizes the run. Howle is a coach's dream who goes all-out on every play, rarely blows an assignment and never lets up. He'll develop into a productive all-around college offensive lineman if he makes progress in pass protection."

A defensive prospect all the way. Most analysts have him projected at safety, though ESPN's Scouts Inc. seems to think that Willis' lack of blazing speed could mean a transition to outside linebacker at some point during his college career.  That's a pretty safe bet, as Willis is constantly described as a tenacious attacker in run support but just a step or two slow against the pass.  Give him a redshirt and about 20-25 pounds by his junior year, and see where he is on the OLB depth charts. 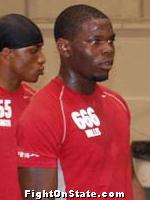 Willis - RECRUIT OF THE BEAST.

He was the first big name on the commit list for Penn State, due to his Philly Catholic League roots and four-star status on Scout.  He's considered a top 25 offensive tackle by Scout and ESPN -- Rivals, not so much.  Made the Pennsylvania AAAA all-state first team in 2008.  Likely projects as a guard at Penn State.  Also, he uncorked this great quote: "If I was going to get on a plane and go to school somewhere, it would have been Florida. But nothing felt more right than Penn State."

Added bonus:  Like Howle, he has that "stuffing freshman in lockers" look about him, although this picture from his PSU announcement with his proud grandmother is rather endearing.

A three-star safety prospect on both Scout and Rivals, SOA committed back in May.  He's from the same high school (JFK) as current Nittany Lions Stephfon Green, Nerraw McCormick, and Shaine Thompson -- our own little pipeline in the Bronx.  Made this dude's All-City first team.  He generally looks very...serious.  Not angry.  Just...serious. 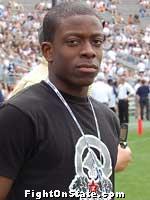 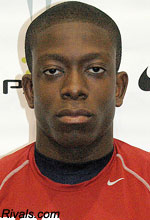 Yes, three of the first five commits were defensive backs.  Givens was an Ohio State commit very early in the process, but changed his mind a few weeks after his high school teammate Malcolm Willis committed to Penn State.  Good times for the home team.  Scout has him as the #11 cornerback, RIvals has him as the #2 player in Maryland.

He is very, very good, and it's highly likely that you'll see him on the field sooner than later.

Highlights of DB Darrell Givens, #49 on Takkle/SI's top 200 (via takklesquad)

Also, Scouts Inc. has a ton of love for him.