The Kids Are Alright: Part Two

Share All sharing options for: The Kids Are Alright: Part Two

Greenbelt, Maryland.  Greenbelt, Maryland.  Where do we know that from?  Thomas is a three-star defensive back who turned heads during the Crab Bowl practice sessions.  His commitment was placed on shaky ground after the "Outside The Lines" affair, but he's solid as solid could be right now.  He made this All-Beltway team as a wide receiver, and the PSU coaching staff hasn't ruled out that position for Thomas in Happy Valley. 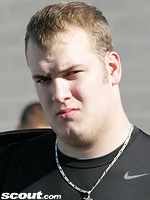 Five star tackle on Scout, four-star on Rivals.  Looks like the bouncer at a tough Irish bar that you think you could take out -- if you drink enough and catch him by surprise -- but then throws you through a Hyundai after you badly whiff on your first punch.  Scouts Inc. is not as much of a fan, and likes him more as a right tackle, but allows for the potential to start on the left side once he has a chance to concentrate on offense.  He's rather fluid for a big kid, in my opinion.  Lighter on his feet than he should be.  For the longest time, people assumed he was headed to South Bend, so his commitment to Penn State was a rather substantial shot in the arm for recruiting (and a shock to even many of his own family members).  Played in the U.S. Army All-American game and selected to the Big 33 team, although he won't be playing in Hershey.  Has been working tirelessly to bring other recruits to PSU since his commitment.

Lost in the hoopla surrounding the Shrive surprise announcement.  His two-star status on Rivals and Scout elicted a collective "Wha?" from the fanbase when he committed back in May.  However, Scouts Inc. sees potential, and doesn't have him rated that much lower than Shrive (82 vs. 77):

Figueroa is an active offensive lineman with good size and athletic ability. He is a very good puller and trapper for a big man. Shows athleticisn when coming out of his stance and uses proper pull techniques. Smooth when turning upfield to get a hit on linebackers. Physical when trapping and displays leg drive after contact is made; very sound football player when on the move. A solid base blocker that mauls smaller players but doesn't dominate defenders his own size; must gain some overall strength for the next level. Uses his hands well but could be more violent on initial blow delivery and needs to lock into the frame of the defender more consistently. Very solid pass deefnder from the guard position; stops the charge pf the pass rusher and holds his ground. Figueroa can be a very productive offensive guard at the collegiate level.

He also made the egregious mistake of blinking in his high school player photo.  You only get one crack at this, kid.  These Polaroids are expensive. 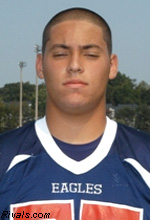 Yes, it's another Eleanor Roosevelt product.  Obviously a little undersized for a cornerback, but that's not as much of a concern in Penn State's scheme.  As Scouts Inc. says, if he was a few inches taller he'd be a more highly-coveted quarterback:

Good deep ball skills tracking the throw, maintaining proper positioning and masking his lack of height with great timing and leaping ability. Competitive and will high-point the football. Possesses great ball skills and is a threat after the INT in the openfield. Feisty run supporter and strong tackler who shows he can maintain force on the edge despite his size. Tackles low and is sound in space. Good blitzer off the edge with his closing speed and ability to slip under blocks. Our main issue is size when projecting for the next level; could struggle defending the deep ball versus today's taller receivers and has yet to show us the ability to press and reroute successfully. Bottom line, Morris is tough, savvy and possesses good cover corner skills with his smooth movement skills. Dangerous returner on special teams adding to his upside as a prospect.

Here's Stephon interviewing some other recruits (including many PSU commits and his own father at the 5:00 mark) at the Scout.com/Under Armour combine last year.  Great job by FightOnState.com's Mark Brennan by giving Stephon the camera and getting out of the way -- he's a funny kid.

Note to slick football marketing people at PSU:  that clip of Roman Morris should be shown to every single parent of a Penn State recruit. 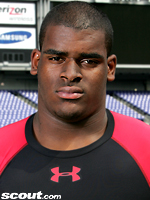 Scouts Inc. describes him as "thickly built."  Have they met Brandon Ware?  Stanley is a three-star prospect on both Rivals and Scout.  Many evaluators see him as a defensive tackle at some point in his PSU career.  He was the primary recruit that people thought might jump ship if Larry Johnson Sr. left Happy Valley, but that's, like, totally ancient history, dude.  Also considered Nebraska.  First-team Washington Post All-Met team.  Makes a special guest appearance toward the end of the Stephon Morris Show above.