Share All sharing options for: Videofication: Derrick Williams In The Senior Bowl 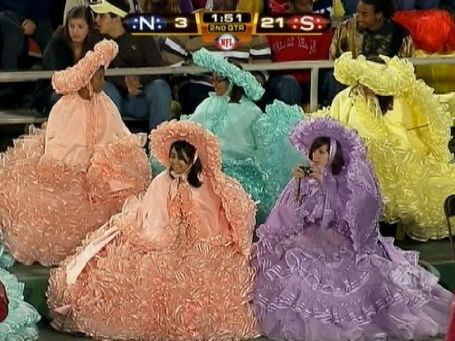 Videofication: come for the football, stay for the girls in enormous dresses.

Derrick Williams made his very last appearance in a Penn State helmet on Saturday and probably incrementally built on the goodwill he had been working on all week long in practice.  He looked sharp, despite having to deal with some questionable quarterbacking, and lead the game in all purpose yards thank to some solid kick returns. 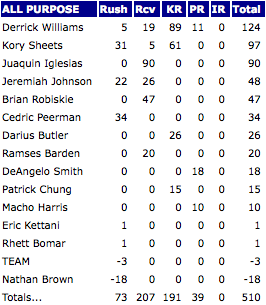 Video highlights after the jump...

The one rush he was given was a typical DWill play, a counter sweep we've seen quite a few times over the past four years.

I wouldn't say he had a tremendous day receiving, but he did what he could given the situation.  When the North quarterbacks weren't tripping over the 20 yard line or fumbling snaps, they were attempting to throw passes.  For those of you who didn't see any of the game, it didn't go very well.

So despite being open on many routes, he was mostly limited to throws of the not really acceptable variety.

Still a major upgrade from Graham Harrell passes like this one; the former Texas Tech QB really struggled to get any kind of velocity on his throws:

When he wasn't runnin' the tunnel, runnin' his routes, or runnin' from tacklers, he was runnin' over water coolers.

His best looks were probably on kick-offs, however, where he picked up most of his all-purpose yardage.

I'd say a pretty good day, all and all.  He looked sharp, fast, and obviously versatile.  He has the vision to return kicks right away, and could develop into a very reliable receiver.

Fox thinks it was a net upgrade, and we are obviously looking forward to the next round of draft projections, as terrible wrong as they sometimes can be.

And one more thing...Mocking The Draft has good things to say as well:

Derrick Williams, WR, Penn State: With the glut of junior receivers coming out, Williams had to prove himself and he did. Outside of good height, Williams displayed everything a team could look for in a receiver. He could slip into the early second round based on his performance in Mobile.