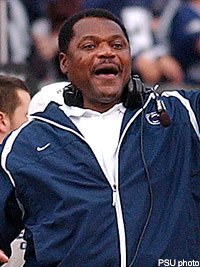 The rumor has been floating around all morning. I've just been waiting for a non-paying site to publish it. David Jones, as always, is our man. Larry Johnson is interviewing with Ron Zook for the Illinois defensive coordinator job.

Two sources in Illinois have called and said that Larry Johnson is a target of Ron Zook's at Illinois, possibly as a co-defensive coordinator and especially as a top recruiter to replace departed Mike Locksley on the Illini staff.

I don't have to tell you this is bad bad bad. With an 82 year old head coach who can't spend more than two hours sitting down in a car or airplane, the assistant coaches are our greatest asset when it comes to recruiting. And Larry Johnson is one of the best of them.