Malicious Internet Interrogation With Hail To The Orange

Share All sharing options for: Malicious Internet Interrogation With Hail To The Orange 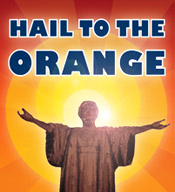 This week Penn State goes on the road for the first time this season to meet the Illinois Fighting Illini. So we sat down with Joe from Hail To The Orange to get his perspective on Penn State and the game.

BSD: Penn State fans can sympathize with Illinois fans this week. We know what it's like to see your team not live up to your expectations. How are you coping with it?

HTTO: I suppose I have become numb to Illini football failure, seeing as how there hasn't ever really been a prolonged period of football prosperity. Its beginning to look like 2007 was just a cruel taste of something Illinois is not allowed to have. Otherwise I have taken to NCAA 10 on my Xbox, and playing the Ohio State and Missouri games over and over, trying to fool myself into believing that it didn't really happen like that, that the Illini came out and threw the ball all over the field and won by 30. Hey its my reality, I will do what I want with it.

BSD: Is it safe to say Ron Zook is on the hotseat in Champaign? Is there any hope that he can return the Illini back to where they were in 2007?

HTTO: Oh my yes, the calls are already coming and they are angry. I listen to the radio call in shows locally here in Champaign, and while normally the locals are the typical very polite salt of the earth "support the team and coach blindly" type, something about getting blown out by the only two real opponents the Illini have faced has turned the locals mean. There are people who want Juice benched (not going to happen) Zook fired (still probably not going to happen, at the very least not before the end of the season) and want the Athletic Director Ron Guenther gone as well, all though I fail to see the logic in that. Zook is visibly very worried for his job, he knows he is squandering an opportunity here, and might not see another season if he doesn't get the team playing better. I'm not calling for his head, I am just stating fact, he basically bet his job on this season, its coming up snake eyes so far.

BSD: Last Saturday the Illini couldn't score in a women's prison with a fist full of pardons. Where are the breakdowns happening on offense?

HTTO: I think at just about every level on offense, there was a major breakdown. Schultz play calling that wont stretch the field, the horrendous amounts of stupid penalties, (too many men in the huddle, holding, multiple false starts) supposedly awesome receivers who cant catch a ball, turnovers. It all just really sucked. The most damning thing of all though, is that given 3 weeks, including a bye week and an FCS team to get things straightened out, the offense came out and made all the same mistakes and poor decisions as week 1.

BSD: How much has the loss of linebacker Martez Wilson impacted the defense?

HTTO: Oddly enough, so far not too much. It has helped that he has only missed against 1-AA Illinois State, and an inclement weather Ohio State, where Pryor only made 4 pass attempts in the first half.  Martez will be missed over the course of the Big Ten season, he was big and fast and there are going to be some good TEs and RBs that I am sure will make us all wish Tez was healthy. So far though Frierson, Thomas and Ellington have filled in admirably.

BSD: I'm sure you probably watched Penn State look completely lost against Iowa last Saturday night. What are your impressions of Penn State and where do you think Illinois can exploit them?

HTTO: I would have to say that Iowa possesses a Daryl Clark voodoo doll that made him look that bad. I fear that Zook will not be able to borrow said doll from Ferentz. Here is the thing, Iowa has a very good secondary, and if there is a major weakness on the Illini defense it is that secondary. The weakness was masked due to Tressel's on going war against modern football, but if Clark throws down field, I fear for the Illini.

BSD: What are the keys to the game for Illinois, and how do you see it playing out?

HTTO: There was once a time where I believed that this offense could score with any team in the nation, now with the evidence before me, I have to drastically reassess what my team is. I believe it has the potential to score, given the fat that this offense is composed of the exact same players as last year, and I think that this sort of offensive failure is frankly unsustainable, there is no way that that many good players can play so poorly for an extended period of time. Eventually things will have to get at least a little better. It may not be until game 5, and it might be too little too late, I am just hedging my bets on the whole Illini football apocalypse that we are seeing play out. The key to this game if the team wants to stand a chance, is to cut down on the dumb penalties, which against Ohio State prolonged their drives, and killed our own. Penalties easily resulted in a 14 point swing. Maybe if we can cut the dumb mistakes this week we will see a team more in line with last years team.

BSD: Thanks, Joe. Good luck on your season.