The Still Life Dies In The Trenches

Share All sharing options for: The Still Life Dies In The Trenches 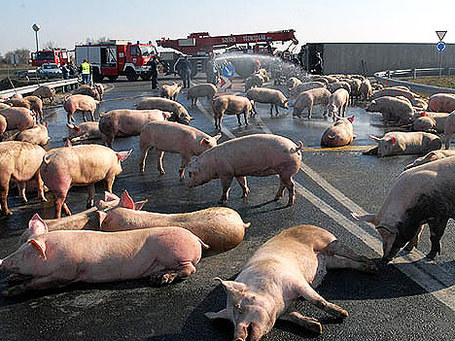 Organizing Hogs Is Not Easy

The Still Life is back this week for another helping of strategic insight, despite my best efforts to quit football all together this week. I was 0-4 as a football person/coach this week. My high school team, college team, pro team, and my fantasy team all took a fat L this weekend. In three of the four cases it was one culprit: the offensive line. Yep that age old adage of you're only as good as your line came to the forefront this week in Happy Valley as the Lions line stunk up the joint. In today's post I will examine a play that really illustrates the struggles of the line the past several weeks and also raises some questions about the running backs as well.

The play in focus today is Evan Royster's -1 yard carry out of his end zone in the first half of the game. This was a play in which the Lions narrowly averted a safety (a safety which we all know came seconds later). This was actually a very good play call given the situation, but as we will soon see, the lack of execution on the play lead to this disaster. 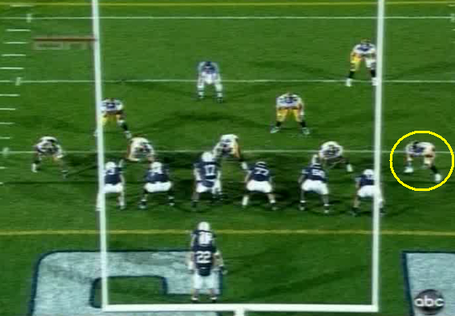 Pre-Snap Read:  lines up in an I formation with the TE to the right. is lined up in a 4-3 with the linebackers shifted over to the tight end (see circled). They are in a pretty vanilla defense right now. The interior linemen are in a "31 technique" which means outside shade on a guard and inside shade on a guard. The ends are playing outside shoulder of the tackles or "5 technique". The defensive end away from the tight end has contain (meaning he cannot let anyone run outside of him on his side, if this happens it is usually a big gain). The circled linebacker has contain on the opposite side. In many ways this is a 5-2 formation with 4-3 personnel. 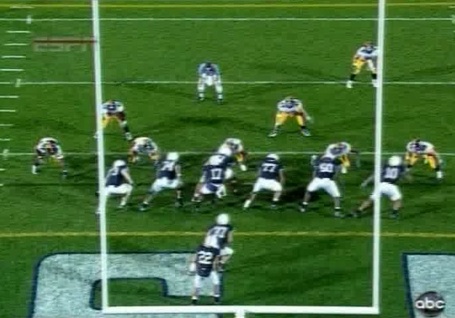 Snap of the football: Look at the steps taken by the offense. Everyone is moving to their right. The offensive linemen are all taking angle steps to their right. This is clearly a zone run play based on what the offensive line is doing. In a zone run you want your offensive line to overtake the defensive man's play side half of his body and get him turned towards the backside. The only exception to this is when a linebacker over runs a play then you wall him off and hit the cutback lane for a big run. In this particular play we would want to see the offensive line turn the defense to the left and create a seam for the running back to run. One person I want you to take note of is number 50 DeOn'tae Pannell; his right foot is moving backwards and his shoulders are opening up ever so slightly. This will be a major factor in the development of this play. 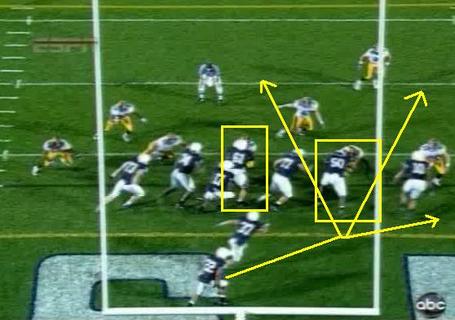 Next Steps: Here we can see the defense react to the offense. At this point they are all reading run and moving towards their left. Everything is looking pretty good for the Lions here. Royster has three possible reads at this point; between the center and guard, off tackle, or outside the tight end. The two blocks he needs to read are in the yellow boxes. If Wisniewski, number 61, gets his man turned to the offense's left this will most likely be a dive up the middle. If he cannot make this block it bounces outside to one of the other reads. Once again take a look at Pannell. Is he overtaking his man and turning him to the left? 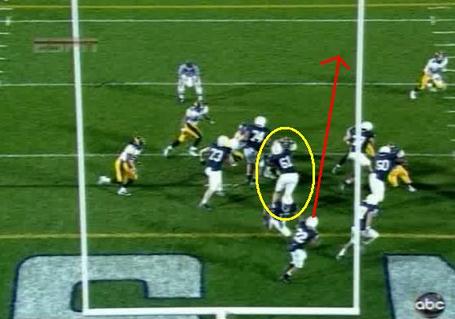 Here we can a seam developing: Eliades, number 77 has walled off an over pursuing linebacker, Pannell has created a wall as well by not overtaking his defensive end. Johnnie Troutman has blocked the backside linebacker as well. The one block that has not been made is by our best returning lineman Stefen Wisniewski number 61. Look at the head of the defensive lineman it is in the hole and that alone scares Royster away from the developing hole and forces him to bounce outside. 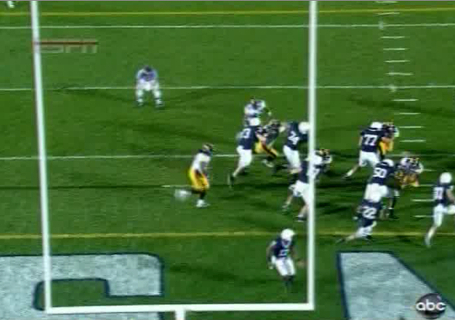 Now we can see why Royster did not run it up the middle even though most of the hole is still developed there even this late. At this point his next read is off tackle. Unfortunately Pannell is not getting the job done here and there is a ton of the defensive end in the hole. Pannell needs to continue to fight to get his right hips around the DE's body. When he does not,  Royster's only choice is to out run him to the edge. 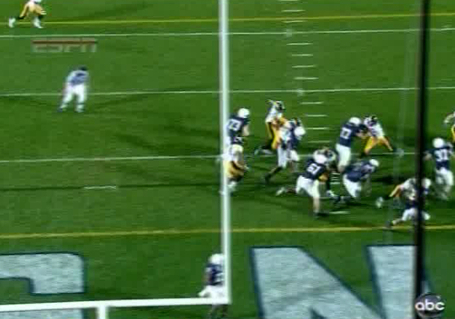 Now Pannell is completely lost his defensive end, who is also about to tackle Royster for a safety. Take another look at where Wisniewski has ended up with his man. 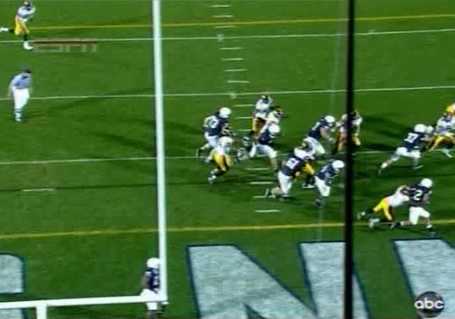 No real analysis here just a tackle taking place here while Pannell watches. I wonder if he yelled "look out!". That would have been the polite thing to do. 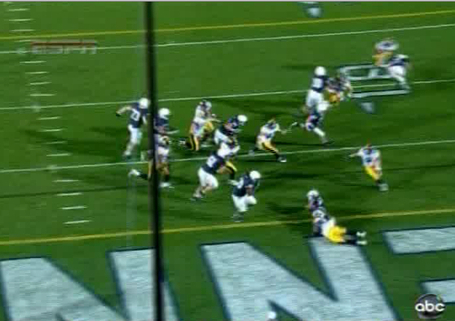 Finally we have the tackle. The Lions were VERY fortunate not to get a safety here on this play.

My Take: This play could have gotten positive yardage if Royster would have turned it up in the seam we see in the early pictures. Yes Wisniewski does not get a great block, but it would have been two to three yards at the minimum and know what we do now about the ensuing plays that could have been all the difference. Instead he looks spooked when he sees a piece of the defensive tackle and bounces it outside where Pannell is not getting the job done. I feel based on looking at the play in these shots that Royster is more to blame for this failure than the offensive line. Was this an A effort from the line? Absolutely not, but it was good enough for 4 yards if the back would hit the hole. The line took a ton of heat this week. But looking at this play I wonder how much of it was the backs not hitting the holes and taking what they could get at three to four yards a clip and looking for the big run instead and just not being effective. Maybe that was why we saw Greene come in midway and run somewhat effectively for a few plays.